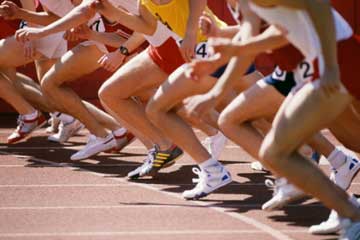 These runners at the starting line my notice an industrial scent by the finish.
David Madison/Photodisc/Getty Images

The human body relies on a balanced intake of carbohydrates, proteins and fats to function properly. If the scales shift too far off the mark in a particular dietary direction, signs of improper nutrition can crop up -- and sweat that smells like ammonia is one of those. Luckily, if exercise leaves you smelling somewhere between industrial strength cleaner and fresh cat urine, there's a pretty easy fix.

Carbohydrates are the powerhouses of energy production in the body, and fats work as their supercharged backups. Proteins are also incredibly important for proper bodily function -- including kicking in some extra juice if needed -- but it's best if they're mainly left to cover their other responsibilities. Some examples of proteins' many roles include forming structural components like collagen and connective tissue, inducing muscle movement, regulating bodily mechanisms and transporting substances about the body. It's enough to keep any amino acid busy.

A high-protein, low-carbohydrate diet is generally what leads to sweat stinking of ammonia. Basically, it works like this. When someone with this sort of diet begins to exercise, his or her body is quickly forced to turn to proteins for the necessary energy. To do this, amino acids are broken down into various components, parts of which are converted into glucose. Other elements that come out of the process are waste products, and if the body can't handle everything being sent its way, the leftovers are excreted out through the skin. Ammonia is one form that ready-to-go waste can take.

Typically, ammonia (very bad in large amounts) would be converted into urea (less bad in large amounts) and safely expelled through urine. Too much ammonia, and the body falls back on its old detoxifying fail-safe: sweat. And stinky sweat at that. Otherwise, an overload of ammonia can impair neurological functions and cause muscle fatigue.

If cutting the protein and upping the carbs doesn't completely do the trick, try drinking more water. Water will dilute the ammonia, as well as make it easier to excrete. Keep in mind too -- if an ammonia aroma is emanating from the mouth, is unrelated to sweating and exercise or is accompanied by other severe symptoms, it could be a sign of something serious like severe liver disease or impending kidney failure. A doctor should be consulted ASAP.

If you're looking to run a marathon or engage in some other exhaustive athletic activity, it might be difficult to avoid smelling like ammonia when you cross the finish line, since prolonged and draining exercise make the body particularly susceptible. But hey, you just ran a marathon, right? Don't worry if you smell a little funky afterward -- it'll pass.

How Itches Work
How Your Skin Works
Dry Skin Overview