Is cinnamon good for the skin? 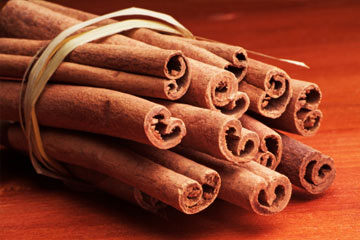 Cinnamon is tasty, and it has an array of health benefits.
©iStockphoto.com/Viktor Fischer

Cinnamon is a popular scent and flavorful spice. It brings a lot of comfort to people in the form of cinnamon buns, cinnamon toast and apple pies. It's common in many confectionary treats; however, although they may taste good, they may not be very good for your diet. What some people don't know is that cinnamon actually has several health benefits, and if you eliminate all the sugar that usually accompanies it, it can actually do your body some good. It can help with everything from high blood pressure to diabetes, not to mention the fact that its antimicrobial properties can benefit your skin.

If you happen to cut yourself and you don't have any antiseptic around, you can actually use the cinnamon in your cupboard. Simply clean your wound, and then sprinkle a little cinnamon over it. It's known to kill bacteria and help prevent infections [source: Balch]. It's important to be careful, though, because cinnamon can also be an irritant, especially in its essential oil form. Applying it to your skin could result in a burning sensation or dermatitis. Some people may also experience an allergic reaction.

Aside from working well as an antiseptic, cinnamon can help lower blood pressure and blood sugar. The natural compounds in cinnamon work like insulin to help promote the absorption of glucose into cells. It may also prevent blood clotting and reduce cholesterol in people with diabetes.

There are several ways to incorporate cinnamon into everyday snacks. Try adding a half teaspoon of cinnamon (2.5 ml) to some applesauce for a treat. You can also spread peanut butter on some apple slices and add a sprinkling of cinnamon. If you want to spice up your morning brew, put some in your coffee pot in the morning [source: Reader's Digest].

See the links on the next page to learn more about the health benefits of cinnamon.

Why do feet stink?
How does my skin affect my overall health?
Which vegetables help your skin?