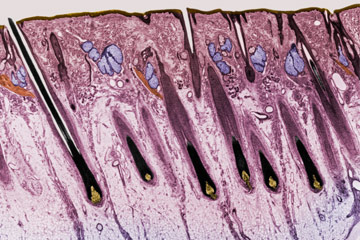 In this cross-section of the skin on the human scalp, you can pick out hair follicles, hairs, sweat glands and sebaceous glands, among other points of interest. The follicle all the way on the left, with its resident hair, is easy to see.
© Visuals Unlimited/Corbis

Despite being as bald as a cue ball, I can grow a beard in a matter of days. Many men can't. Yet, they try hard, constantly growing hair and then shaving, believing their beards will grow thicker. It's a fool's errand. You see, I shave my head practically every day. If shaving made hair grow thicker, I'd have a full head of gleaming, streaming, flaxen, waxen hair by now and a beard like Santa Claus.

For one thing, hair growth is determined below the surface of the skin, in the dermis, where a tiny tube called a hair follicle is located. It's a little like the hole you might dig for a tiny seed before it starts growing above the soil. The follicle determines a hair's color, consistency and thickness. People have thicker beards, for example, because they have more hair follicles on their face. Genes, hormones and age all influence how many hair follicles a person has. Aside from transplanting some spare follicles from another part of your body, nothing you do can increase that amount [source: Shmerling].

Along with how much hair we have and where we have it, humans have been obsessing over the coarse matter of shaving for decades. A 1928 study published in the journal Anatomical Record concluded that shaving "a selected part of the beard area" has no effect on the color of a person's hair, its texture or growth. (Note: The study featured only four male participants, all of whom study author Mildred Trotter thanked heartily.) A 1970 study in the Journal of Investigative Dermatology confirmed that shaving does not alter "the width or rate of growth of individual hairs." That study featured five young men, all of whom were asked to shave one of their legs while keeping the other as a control.

Instead, shaving only gives the appearance of thicker hair. That's because a person's hair naturally tapers at the end. When you shave, all you're doing is mowing down the thin shaft and exposing the thicker part of the hair near the skin. While the resulting stubble might seem thicker, it's not. It looks fuller because the hair is cut straight and short. Moreover, that stubble may stand out against the normal color of your skin [source: Castro].

How did this myth about shaving and hair thickness get started? Like our follicle analogy before, it might be plant-related. That is, since pruning a plant stimulates the growth of new branches, maybe shaving does the same thing for hair. That's not the case though, as hair doesn't branch out like a rose bush. Each strand simply grows out of each follicle.

So why do men sport mountain man beards and 70s 'staches?

Why Do Men Grow Facial Hair? 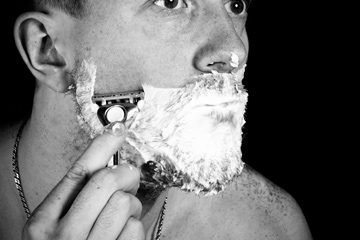 Is he getting ready to do some wooing, or is he just doing a little bit of maintenance?
Alexander Makarov/iStock/Thinkstock

Males begin growing facial hair during puberty when they start reaching sexual maturity. During that tumultuous time, boys get taller and their voices get deeper. That's because male hormones, particularly testosterone, go into overdrive. While it's easy to understand growth spurts and deep voices, what's the purpose of facial hair? It's not necessary for our survival. Nor does it play a direct role in reproduction. It doesn't even keep you warm in frigid climes.

The answer seemingly lies in evolution. Some experts believe that facial hair allows males to attract mates. In their opinion, women often base their perceptions of a man's age, social status and vitality on the color and texture of his beard. If she likes what she sees, the species propagates [source: Cornell Center for Materials Research].

A 2012 study published in the journal of Behavioral Ecology flies in the face of this common evolutionary theory. Researchers at Victoria University in Wellington, New Zealand, and at the University of Lethbridge in Alberta, Canada, showed a group of women in Samoa and New Zealand pictures of men. Some had beards; others did not. The majority of women did not think bearded men were any more attractive than men without beards [source: Alexander].

If it's not about sexual signals between men and women, then what is it? In the same study, researchers concluded that bearded men might intimidate their rivals. A thick, bushy beard, for instance, may make a man look larger and more menacing, and in an evolutionary context, that might work well in scaring off a potential mate's suitors or in a battle over other resources [source: Alexander].

Both the men and women in the study saw bearded men as more aggressive, especially when that person had an angry look on his face. "Facial hair may intimidate rival males by increasing perceptions of the size of the jaw, overall length of the face, and by enhancing aggressive and threatening jaw-thrusting behaviors," the researchers said. Moreover, other studies suggest juries are more likely to find a bearded man guilty of a serious crime [source: Alexander].

The bottom line: If you want to woo a girl, shave. If you want to intimidate someone, grow a beard. In 2013, several members of the Boston Red Sox grew beards to inspire bristly camaraderie and to intimidate their opponents. They won the World Series. While some baseball fans loved the beards, the whiskers engendered a primal response in many people, especially New York Yankee fans. "I never hated the Red Sox more," one New York fan wrote on a blog. "And I might add their beards are making me sick!"

When you think of bearded U.S. presidents, whose face do you picture? If it's Abe Lincoln's mug, then you have one Grace Bedell to thank for that famous fringe. The 11-year-old from Westfield, N.Y., wrote Lincoln a letter in which she wrote the following [source: Basler]:

From the too much information file: Unlike most male boys, I never fantasized about shaving. I was a visionary, and knew that it would just be another thing I'd have to do during the day. Unlike getting my driver's license, I did not welcome shaving. And to this day, I still don't. I've gone through long periods of sporting a beard and knew firsthand that shaving didn't make it come in any thicker. Toward the end of my bearded days, roughly 10 years or so ago, I kept it neatly cropped, almost to the skin. Then it started coming in white as in gray, as in old. So I shaved it off. I sported a goatee two years ago, but it made me look ancient. Today, I shave my head and it's a pain, although I'm reminded by my girlfriend that it's less of a pain then shaving a pair of legs. We all have our burdens to carry.