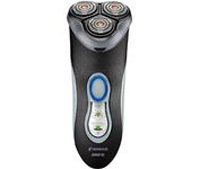 Gillette introduced his shaving system in 1901. By the end of WWI in 1919, the act of shaving ­had been completely transformed in the United States. Beards were out and the clean-shaven look was nearly required of all men.

Then, in 1928, the act of shaving was re-conceptualized again by a man named Jacob Schick. Schick got his start in the shaving business by inventing a system for loading a razor with a new blade without ever touching the blade (the forerunner of "injector" razors). But Schick's ultimate goal was to eliminate the shaving cream and water altogether and create a dry shaving system. To do this, Schick invented the electric razor.

Schick's first problem was a creative one -- he had to "see" shaving in a completely different way. Up until the time Schick invented his shaver, shaving had always been done with a blade that slices. The blade has to be sharp enough to slice off the hair in the same way that a knife slices through a stick of butter. Schick's electric razor, on the other hand, would use the same concept behind a pair of scissors. The hair is actually sheered off.