Twin Blades and Beyond 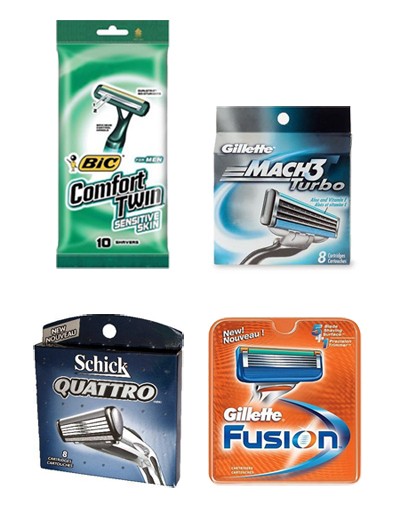 ­For 40 years, shaving techn­ology stayed about the same. Sure, electric razors got a bit more sophisticated (and much more popular, thanks to men's apparently in-born love of electric gadgets and the appearance of electric razors in many popular movies). The injector razor made wet shaving a little safer.

Then, in the 1970s, wet shaving advanced again with the creation of the twin-blade cartridge­. The idea had been around for awhile, but the revolution that occurred in the 70s happened from a marketing standpoint. Gillette put its full weight behind the twin-blade concept with a huge advertising blitz, and Schick then went head-to-head with Gillette. Everyone was taught that two blades were better than one through billions of dollars spent on advertising.

Development on the triple-blade razor began in the 1970s, but apparently there were problems with three blades. They caused irritation. In 1998 the solution to this problem appeared. The Mach 3 shaving system from Gillette uses three blades, but the blades are very small and each one is canted at a slightly different angle in the cartridge. The addition of lubricating strips, a flow-through blade design and other innovations made this the system to beat.

Schick rose to the challenge by introducing the Quattro, a four-blade shaving system. And Gillette rose to that challenge with the Gillette Fusion, at five blades. It would seem that this would mark the logical extreme in the evolution of multi-blade designs. Surely, if you can't get a close shave with 5 blades, the incremental improvement on a sixth blade is not going to help you much.

For shaving to advance from here, someone will have to re-conceptualize again. Perhaps everyone will turn to laser hair removal and solve the problem completely? Who knows.