Why can colloidal silver turn your skin blue? 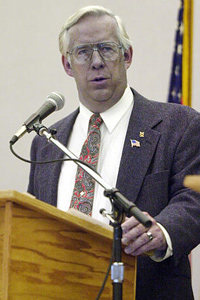 Stan Jones isn't your average politician from Montana. He has a rare condition called argyria -- his skin is grayish-blue. He developed argyria after drinking too much colloidal silver to ward off infectious disease, because he feared there would be an antibiotics shortage [source: BBC News]. Jones's case isn't unique. A few other people who have consumed silver have also developed the condition.

When used topically, silver has antibacterial properties that can be medically useful. A coating of silver nanoparticles on a wound dressing, for example, creates a barrier that germs can't cross, reducing the chance of infection significantly [source: California Nanoscience Institute]. Colloidal silver is a suspension of tiny particles of silver in water. Some people believe that drinking a colloidal silver solution will provide protection against infectious diseases [source: Woolston]. However, there's no scientific proof that drinking colloidal silver has any beneficial effects. That doesn't mean there are no benefits -- it just means there hasn't been enough serious research to document the medicinal value of colloidal silver.

The Food and Drug Administration (FDA) doesn't approve of colloidal silver as a medical treatment. But you can still find colloidal silver marketed as a health supplement, because the FDA has no oversight over supplements. If a company claims that colloidal silver can prevent serious illnesses, however, the FDA can intervene.

Ingestion of a little silver should have no effect on your skin. Doctors estimate that the average person would have to ingest at least two to four grams of silver to develop argyria [source: Jonas et al]. Once the silver is in your digestive system, silver ions enter your bloodstream. The ions can pass through cellular walls, binding with amino acids inside the cell's cytoplasm. These ions retain a dark color.

Argyria most affects skin that receives regular exposure to sunlight, leading doctors to believe that silver stimulates pigment production. The combination of pigment and silver ions turns the skin blue-gray. The effect appears to be irreversible.

Most vendors recommend doses of colloidal silver well below the levels that would produce argyria. This suggests that people with argyria ingested too much of the solution over too short a time. Considering the lack of evidence that colloidal silver has medical benefits, a better choice might be to seek other forms of medical treatment.

Learn more by following the links on the next page.

Can you get rid of stretch marks?
Pseudo-Ceramides Overview
Mineral Body Wraps