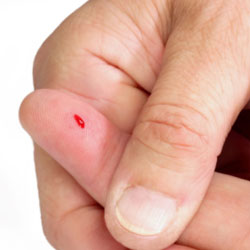 A small, superficial wound like this can become a health nightmare within a few short days.
Hemera/Thinkstock

In April 2009, Rob Marshall's youngest daughter stayed home sick for the day. So he did what most parents need to do in that situation; he stayed home with her. And, in most cases, for most parents, the story would end there.

Instead, for Marshall, his tale turned into a horror story. After sitting all day, he had a slight, unexpected pain in the back of his thigh. This transitioned to increasingly excruciating pain, which then led to six weeks in the intensive care unit, almost losing his leg while doctors worked to remove dying tissue during five surgeries, receiving 23 units of blood and going into kidney failure [source: Marshall].

What could have caused this sudden, odd turn of events after a seemingly normal day? Well, if you were playing medical detective while reading the above paragraph, you may have thought of a number of possible causes for Marshall's illness (one that, thankfully, he eventually recovered from). However, you would only take the detective medal of honor if you guessed necrotizing fasciitis, more commonly known as flesh-eating bacteria.

While they may seem unlikely or like something out of a science-fiction novel, flesh-eating bacteria are very real, serious, and potentially fatal and, as illustrated above, puzzling in the way they attack. Take 21-year-old Devin Adair from the University of Tulsa. The tight-end football player suddenly became ill and died one week later. Autopsy results revealed flesh-eating bacteria as the cause of his mysterious death [source: Owings]. In fact, an estimated 30 to 40 percent of flesh-eating bacteria cases are fatal [source: Stoppler].

So what is necrotizing fasciitis anyway? How can it take you from a small paper cut to potential death? Read on to learn about how flesh-eating bacteria work, what symptoms to be on the lookout for and the actions you can take to protect yourself.

When it comes to necrotizing fasciitis (aka flesh-eating bacteria), the disease is a case of something that is usually quite mild becoming a dangerous infection. In fact, one of the most common types of flesh-eating bacteria is group A Streptococcus (Strep A), the same bacteria responsible for strep throat. Furthermore, about 15 to 30 percent of us are walking around as carriers of Strep A right now [source: National Necrotizing Fasciitis Foundation].

A person contracts flesh-eating bacteria -- a very rare illness -- when that same Strep A, or other bacteria, enters his or her body, be it through an open wound, an intestinal surgery site or even a bruise or muscle strain. The bacteria can be passed via person-to-person contact, but is unlikely to develop into flesh-eating bacteria without that open wound. Once they enter your body, the bacteria quickly go to work killing the skin, tissue and fat in their way, leading to ultimate organ failure and possible death [source: WebMD].

In fact, flesh-eating bacteria work so quickly that early treatment is imperative to survival. Immediate treatment includes administration of high doses of antibiotics, such as penicillin and clindamycin, to fight the infection, removal of the damaged and dying flesh to impede the spread of the bacteria and treatment of any toxic shock symptoms as the body starts to shut down [source: Centers for Disease Control and Prevention].

So if it is true that flesh-eating bacteria move so quickly that something can go from being a minor spot on your leg to involving that entire leg in fewer than thirty minutes, it must be easy to watch for signs of and diagnose the condition, right? Wrong. Keep in mind that there are only about 500 cases of flesh-eating bacteria a year, and the illness is quite unpredictable as to when it will develop and where [source: Owings]. As such, to date, the best way to diagnose this predator-like condition is through watching for the sudden onset of symptoms, examining tissue and running tests to look at the condition of a patient's organs [source: WebMD].

Besides a formal medical diagnosis, what symptoms can we look out for ourselves? And how fast do they spread? Keep reading to get the full details on the symptoms related to flesh-eating bacteria. 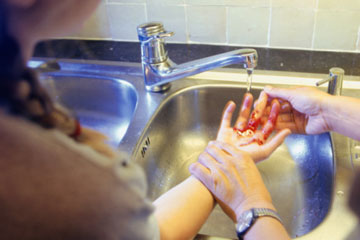 Unlike some illnesses, such as high blood pressure, that silently take their toll without any symptoms, flesh-eating bacteria rings the doorbell and bangs on your door upon arrival. In fact, the first sign of flesh-eating bacteria is usually pain from an injury. This may improve, but then get drastically worse, disproportionately to the type of wound. The skin can become hot, swollen and red. You may experience diarrhea, fever, chills, vomiting and nausea [source: WebMD].

And all of these symptoms will take place on an accelerated timeline. Here's how the symptom progression typically occurs:

Now that you know what to be on the lookout for when it comes to flesh-eating bacteria, what can you do to prevent this illness? Read on to discover your risk level for contracting flesh-eating bacteria and learn some basic hygiene practices you can employ for protection.

With what you've read on necrotizing fasciitis/flesh-eating bacteria so far, you are probably taking this illness quite seriously. Although you should be aware of the seriousness of this condition, it doesn't mean that you should barricade yourself at home. Remember, the condition is very rare, and locking yourself at home might not protect you anyway. However, should some of us run for cover more than others? Are there any actions we can take to protect ourselves?

Everyone is at risk for flesh-eating bacteria, even folks you would usually characterize as healthy. That said, there are a few risk factors that do increase your chances of contracting flesh-eating bacteria. You are at higher risk if you already have a poor immune system; just had an infection with a rash, such as chickenpox; have any chronic health issues, such as diabetes, kidney disease or cancer; have any cuts or use steroid medications [source: WebMD].

Regardless of whether you fall into any of these categories, there are still a few standard precautions you can take to try to prevent flesh-eating bacteria. To protect yourself and others, follow these basic sound hygiene practices:

As important as these hygiene practices are, perhaps the best measure of protection comes from stopping the spread of flesh-eating bacteria. To obtain that protection, be aware of your body, watch for symptoms and contact your doctor with your concerns.

So you've done everything you can to protect yourself -- practicing hand hygiene and watching for symptoms -- but somehow you become one the unfortunate few to contract flesh-eating bacteria. At this point, your goal becomes joining the 60 to 70 percent of people who do defeat this illness. For inspiration, go to the next page to learn about the survival stories of two women who went on to establish a nonprofit organization that serves as a resource and awareness tool on flesh-eating bacteria.

How to REALLY Wash Your Hands

Good 'ole soap and water: Turn the water to warm and wet your hands. Put soap on your hands, rubbing it into a nice lather over your entire hands, being sure to get in between all of your fingers. Keep that up for 15 to 20 seconds. Rinse and dry. Avoid touching the faucet again by using a towel to turn it off.

Hand sanitizer: When you don't have access to soap and water, you can use an alcohol-based hand sanitizer. Be sure to check the ingredients for that alcohol. Put some of the sanitizer in your palm. Rub it all over your hands until they are completely dry. 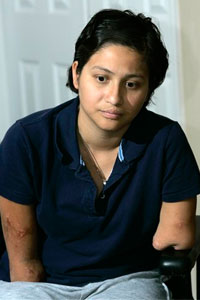 As you learned earlier, the key to surviving flesh-eating bacteria is early treatment through high-dose antibiotics and surgery to remove infected flesh. But what you may not know is, once you survive this illness, you don't have to worry about that same strain redeveloping in your system. It's not reoccurring, meaning, once it's gone, it's gone for good. What does remain, though, are vivid memories of the frightening battle.

Jackie Roemmele and Donna Batdorff, founders of the National Necrotizing Fasciitis Foundation, both share their stories on the foundation's Web site. Following is a little about what they survived.

In 1993, Jackie had surgery to repair post-pregnancy hernias. It appears that her suture site was the ideal place for flesh-eating bacteria to enter. Sure enough, she went through a long battle with flesh-eating bacteria -- a case that wasn't accurately diagnosed until well into her fight. At times, she had a 104-degree fever, terrible pain and anemia. And although she survived flesh-eating bacteria, surgeries to remove the dying tissue left part of her body numb and disfigured. After this struggle, meeting Donna through the Internet and establishing the National Necrotizing Fasciitis Foundation became a way to help others through her own experiences [source: Roemmele].

Donna's story is different, but equally inspiring. While on a skiing trip in 1996, Donna, who had always been healthy, started to feel like she had the flu. She had a small cut in her finger, which turned into soreness in her arm. Thanks to flesh-eating bacteria, that soreness just got worse. Even though she felt awful, somehow, she made it home from her trip. Ahead of her was a long fight -- one with dehydration, low blood pressure, several days of unconsciousness and even being put on life support. Donna had five surgeries to remove one of her fingers, scrape some of her fingers, remove infected tissue and graft skin from her thighs to her arm. A year later, though, Donna -- newly fitted with prosthetic fingers -- was back in action biking and taking aerobics [source: Batdorff].

Although Jackie, Donna and other survivors have made it through their cases of flesh-eating bacteria, it is clear that emotional and physical scars can and do remain. Drawing from their own experiences, Jackie and Donna created the National Necrotizing Fasciitis Foundation to increase awareness, support people remembering loved ones lost to the illness and help those seeking to learn more about flesh-eating bacteria.

For more information on flesh-eating bacteria and related health topics, visit the links on the following page.

Should You Pop Your Blisters?
Can psoriasis increase my chances of a heart attack?
How Scars Work