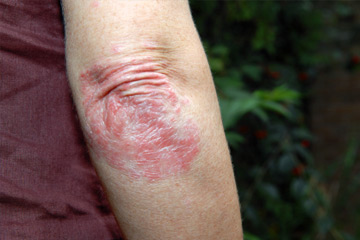 You might have seen ads for psoriasis treatments that show the red, blotchy skin that comes from the condition. If you don't like looking at it, imagine living with it.

Psoriasis is an autoimmune disorder, which means it prevents the immune system from functioning correctly and identifying and killing pathogens. When our bodies are working properly, we shed 40,000 skin cells every minute. The immune systems of people with psoriasis send out faulty signals to the body, triggering the creation of excess skin cells. Instead of falling off, the cells build up on the skin and form red, scaly patches [source: National Psoriasis Foundation].

No one knows exactly what causes psoriasis. But some people are genetically predisposed to the condition, and when predisposition is combined with a trigger, such as stress or medication, it results in psoriasis. In fact, you could be healthy one day and unknowingly trigger a psoriasis outbreak the next. It's likely that 10 percent of the population is genetically predisposed to the disease, but only 2 to 3 percent will ever actually develop it [source: National Psoriasis Foundation].

There are five different types of psoriasis, which all have different symptoms. The most common type is plaque psoriasis, which manifests in the form of red patches covered in white or silver scales. These patches are composed of skin cells the body normally sheds. People with plaque psoriasis often develop these patches on the elbows and knees, but they can form anywhere on the body [source: National Psoriasis Foundation].

There are three types of pustular psoriasis: von Zumbusch, palmoplantar pustulosis and acropustulosis. Von Zumbusch psoriasis begins with painful, red skin. Pustules follow within a few hours, and these dry and peel during the next two days, giving the skin a glazed appearance. This type of psoriasis can be triggered by certain medications or pregnancy and can cause fever, anemia and dehydration [source: National Psoriasis Foundation]. People experiencing symptoms of von Zumbusch psoriasis should see a doctor immediately because this type of psoriasis can cause heart or lung failure if left untreated [source: eMedicineHealth]. Palmoplantar pustulosis causes pustules on the palms of hands and soles of feet, which turn brown and peel. It occurs mostly in past and current smokers and doesn't necessarily go away when a person quits smoking [source: American Osteopathic College of Dermatology]. Acropustulosis is an extremely rare type of pustular psoriasis that causes skin lesions to form on fingers and toes. These lesions are painful and can cause deformity of the nails and even changes in bone structure [source: National Psoriasis Foundation].

Inverse psoriasis is the fourth type of the disease, and it affects areas where skin folds, such as the armpits and genitals. Red plaques form in the folds, causing the skin to become tender and irritated [source: National Psoriasis Foundation].

The fifth and most rare type of psoriasis is erythrodermic psoriasis, which causes protein and fluid loss that can lead to infection, pneumonia and congestive heart failure. Symptoms include severe redness, excessive shedding of skin, itching, increased heart rate and fluctuating body temperature. People experiencing the symptoms of erythrodermic psoriasis should see a doctor immediately [source: National Psoriasis Foundation].

Read on to learn about psoriasis treatments.

Our skin is only 0.04 inches (1 millimeter) thick when we're born, but it thickens to 0.08 inches (2 millimeters) as we age. [source: Health Unit]. Think about that the next time you scrape your knee.

There are three treatment methods for psoriasis, depending on the severity of the condition. There are topical medicines, which can be spread over the affected areas; phototherapy, which uses ultraviolet light to combat the disorder; and oral medications, which fight the disease from the inside out. In more extreme cases, a combination of treatments may be necessary, and treatments are rotated to keep the immune system from becoming resistant to any one medication [source: American Osteopathic College of Dermatology].

Topical treatments contain steroids or vitamin D3 and work by slowing the growth of excess skin cells. The treatments may cause itchy, dry skin, and they may discolor clothing, towels or anything else that comes in contact with the affected areas [source: National Psoriasis Foundation]. Most doctors recommend trying a topical treatment before phototherapy or oral medications.

Oral medications are generally prescribed for severe psoriasis cases when other treatments are ineffective. Most of these medicines work by suppressing the immune system, which can be dangerous because the body is more susceptible to disease [source: National Psoriasis Foundation].

Is there a cure for psoriasis? Keep reading to find out.

Is There a Psoriasis Cure?

There's no cure for psoriasis and it's unknown what causes the disease, but doctors and scientists continue to search for answers in hopes of developing a cure. A promising study by the University of Bonn in Germany recently found that a certain group of enzyme inhibitors, known as metalloproteinase inhibitors, can normalize the overactive skin cells in psoriasis patients and help them maintain healthy levels of cell division [source: Science Daily]. But more testing is needed before the treatment can be approved for medical use.

There are several organizations also working to find a psoriasis cure. The non-profit patient advocacy group Psoriasis Cure Now is at the forefront of this effort. Its members raise money for psoriasis research, educate lawmakers about the disease and organize psoriasis walks to raise awareness and money. [source: Psoriasis Cure Now].

Keep reading to learn how psoriasis patients cope with the disease on a daily basis.

Laughter Really Is the Best Medicine

Studies show that laughing can actually strengthen the human immune system by increasing the production of T cells in the body, which help fight disease. [source: Brigham and Women's Hospital].

Although there's no cure for psoriasis, millions of people live with the disease every day. People with mild cases live relatively normal lives, but more severe cases can be debilitating and even life-threatening. But psoriasis can cause more than just physical damage to the skin. Many psoriasis patients also have low self-esteem because their skin can be unsightly and difficult to hide. And many others are diagnosed with depression and feel alienated because people don't understand psoriasis and fear it's a contagious disease. But there are numerous support groups for people with psoriasis that can help them cope with the disease and help them educate others about the condition [source: Griffin].

Overall, the key to living with psoriasis is a proper diagnosis followed by proper treatment. To learn more about psoriasis, check out the links on the following page.

The Cost of Psoriasis

The annual costs associated with psoriasis add up to $11.25 billion. This number includes health care costs and wages lost from missing work. More than half of the people diagnosed with psoriasis miss almost an entire month of work each year because of the disease [source: National Psoriasis Foundation].

Why can colloidal silver turn your skin blue?
What is harlequin ichthyosis?
Staph Infections 101