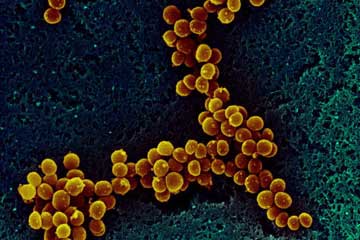 If you've ever been hospitalized, then chances are you've noticed many of the precautions taken to prevent infections in patients. One of the most serious known infections to cause trouble in hospitals is the staph infection. Caused by Staphylococcus bacteria, these infections can invade your skin, lungs, urinary tract, heart and bloodstream. To fully understand the effects of staph infections on the body today, it's best to look back on how they have evolved over the past few centuries.

In 1881, Scottish surgeon Sir Alexander Ogston discovered and named the primary cause of wound infection "Staphylococcus." Until this time, no one knew what exactly was causing wounds to become infected. In 1928, the bacteria-fighting medication penicillin was discovered, and in 1941, it was used to cure a British policeman who had a strain of Staphylococcus. Penicillin proved helpful for curing staph infections for a few years, but its widespread use caused the staph bacteria to mutate and become resistant to the treatment. Fortunately, in 1959, a new cure was found in methicillin, an antibiotic related to penicillin. However, by 1961, the bacteria had mutated again to resist it, creating a new strain called methicillin-resistant Staphylococcus aureus, or MRSA. The introduction of MRSA led to a change in infection control practices, but it still remains a threat [source: Orent].

Because of its resiliency, MRSA is often considered the most frightening type of staph infection, but it's certainly not the only kind. Staph bacteria can live on people as well as inanimate objects without anyone being the wiser, and many people can carry the bacteria without ever having an infection. There are more than 30 types of staph bacteria, causing a wide variety of symptoms we'll look at more closely later. The most common type is Staphylococcus aureus, which can cause infections like cellulitis, impetigo and boils on the skin. It can also cause non-skin-related illnesses such as toxic shock syndrome and food poisoning. If not properly treated, staph can cause serious illness and can result in death.

Up until the 1990s, staph was most commonly found in hospitals [source: Borlaug]. However, as we'll see in the next section, it has begun to spread outside medical facilities.

Since staph bacteria can live almost anywhere, the ways it can lead to infection are numerous. It can live in improperly sanitized medical equipment, in hot climates, in salty food items -- even cooking contaminated food won't kill it because the bacteria can survive high temperatures. Food poisoning comes from eating infected food, which can occur if the dish is prepared by someone carrying staph bacteria or if the food was left sitting out for too long.

The way staph bacteria infect your body is no different than the way any other type of infection works. The bacteria make their way into your system, often through an open wound. From there, the bacteria can enter the bloodstream, causing blood poisoning, and even the digestive system, which results in food poisoning -- even if you are otherwise healthy. Once the bacteria get inside your body, they cause an infection, which can range from small boils to heart failure depending on how and where they're taken into your system, but we'll talk more about symptoms in the next section.

One place staph has been known to thrive is in hospitals. As patients come in and out with a variety of wounds and weakened immune systems, and especially with the widespread use of invasive devices like feeding tubes, catheters or dialysis, the bacteria can often find this an easy area to slip in, because they're consistently opened wounds. Unsanitary conditions such as improper hand washing and non-sterilized surfaces can lead to the transfer of staph bacteria at some hospitals, especially since people may carry the staph bacteria unknowingly.

Staph can also be spread simply by skin-to-skin contact, so people living in group situations such as dorms can be easily infected, too. For these same reasons, contact sports, such as football and wrestling, are also known for spreading staph. Between 2005 and 2008, six different players for the Cleveland Browns got staph infections. It even affected two of the highest profile players in football, Peyton Manning and Tom Brady, in 2008 [source: Gregory].

Having a low white-blood cell count makes you an easy target for a variety of infections, staph included. Since white-blood cells defend against infection, having fewer of them means staph can infect your system more easily.

Basically, anyone can be at risk for staph infections, but what is it going to be like if you get one? We'll answer that question in the next section.

Since staph bacteria come in a variety of shapes and sizes, it's no surprise they can cause a wide-ranging collection of problems. Skin infections are the type most often associated with staph, but many different kinds of problems can occur with a staph infection.

Skin infections can range from annoying to painful. Boils are the most common symptom, identified by a painful pocket of pus in a hair follicle around the infected area that will break open and drain pus and blood. Impetigo and scalded skin syndrome most often affect infants and young children with staph infections. Both come with rashes, but impetigo also features blisters usually found around the mouth. In older people, staph infections may manifest as cellulitis, which causes the skin on the legs to redden and itch [source: Hirch].

Staph-related food poisoning comes on quickly and lasts for only a day or two. It's accompanied by cramps, vomiting and diarrhea, and it's contracted when your hands or food are exposed to the staph bacteria by skin contact, coughing or sneezing.

Toxic shock syndrome is often linked to the use of certain types of tampons and causes fever, vomiting, confusion, seizures, headaches and rashes. It's believed to be connected to either fibers cutting into the skin, or by superabsorbent tampons being kept in too long and creating a breeding ground for the bacteria. If left untreated, it can ultimately lead to kidney failure and possibly death [source: Mayo Clinic].

Blood poisoning, or bacteremia, is also an effect of a staph infection and happens when the staph bacteria get into your bloodstream, causing a high fever. These infections can happen in your organs as well, including the heart and lungs.

One other major illness caused by staph is septic arthritis. With this condition, staph bacteria invade the joints and cause swelling, pain, fever and chills. As with the rest of these infections, it's usually contracted when an open wound comes into contact with the staph bacteria.

MRSA, which we've briefly covered already, behaves similarly to many other types of staph infections, with the exception of its superbug immunity to antibiotics. Its symptoms resemble the skin infections listed above, and it is known to cause cellulitis, boils, abscesses, carbuncles or impetigo.

Since the staph bacteria are known to mutate and adapt, antibiotics aren't always useful in treatment. As we'll see in the next section, care is possible, but prevention is the key to keeping the bacteria from spreading at all.

Treatment and Prevention of Staph Infections

Staph infections are a strange entity to deal with because their treatment is what has led to their strength. By using antibiotics, the bacteria have adapted and learned new tricks, turning strains like MRSA into a superbug. If you think you've got a staph infection, you should see your doctor immediately.

Once you're in the doctor's office, a tissue sample or nasal secretion sample will reveal to your doctor whether your infection is staph-related.

If your doctor is able to identify the bacteria behind the infection, he or she will decide whether an antibiotic is necessary. As we mentioned earlier, many strains of staph are resistant to common antibiotics like penicillin and methicillin. When confined to the skin, a doctor may first try to drain the fluid before using antibiotics. Although the bacteria still remain, this clears away the initial infection.

The best way to deal with a staph infection is to not get one. The prevention methods are remarkably easy and resemble the list of hygiene tips your grandmother might have given you:

For lots more information about staph infections, continue on to the next page.

Skin Parasites
Are chicken pox and shingles the same thing?
Can wearing sunglasses clog your pores?