Are foot scrapers safe to use on my feet? 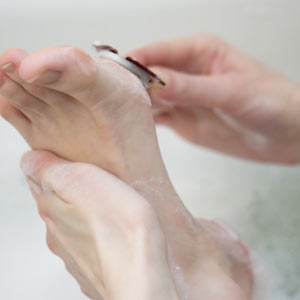 Think about how much pressure your feet experience every day. When we're standing up straight, they're the lowest point on our body, and that means they're supporting the weight of everything above them.

It's no wonder we get calluses, corns and hardened skin on the bottom of our feet. Fortunately, foot scrapers are available. They're relatively safe to use, but for some people it might be a better idea to tiptoe around them.

There are several different types of foot scrapers, but they all serve the same purpose -- to remove hardened skin from your feet. For instance, if you notice that a corn is developing on your toe, you can use a foot scraper, such as a pumice stone, to remove it. All you have to do is gently rub the corn with a scraper, and it will go away. Rubbing too hard, on the other hand, will only make matters worse. You could end up removing too much skin, leaving behind an open sore.

For most people, an open sore wouldn't be the end of the world, but for diabetics it could be very serious. In the United States alone, there are around 80,000 amputations every year because of diabetes. All it takes is simple cut on the foot, which can lead to infection and then require an amputation [source: Williams]. It doesn't matter if a TV commercial shows a foot scraper that won't pop a balloon. Anytime you create friction against your skin, you run the risk of ending up with a cut or an open sore. Diabetics are probably better off playing it safe and not using a foot scraper. If you are diabetic and you develop a corn, calluses or any other type of foot condition, you should consult your doctor right away.For anyone else, however, foot scrapers are generally safe.

For more information about the safety and skin care, see the links on the next page.