How to Improve Skin with Tea Tree Oil 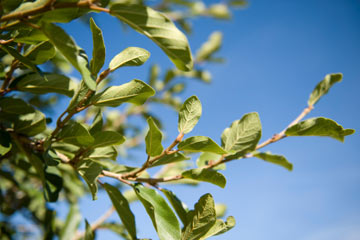 Today, you can find tea tree oil in everything from your shampoo to your deodorant, and it has the potential to improve your skin by treating acne, psoriasis, eczema and many other conditions. And aside from helping your skin, tea tree oil has been used to treat everything from bad breath and dandruff to staph infections and genital herpes.

Tea tree oil has a long history of medicinal use. The practice of applying tea tree oil comes from Australia, where Aborigines have been using it as an antiseptic to treat cuts and burns for thousands of years. By using a steam process, the oil is distilled from the leaves of a tree called Melaleuca alternifolia, which was given the name "tea tree" by Captain Cook of Britain when he noticed natives using its leaves to make tea. (The tea tree actually has nothing to do with Camillia sinensis, the plant we use to make popular drinks such as black tea and green tea.) Later on in the early 20th century, tea tree oil became the antiseptic of choice for most Australian doctors. Its popularity diminished, however, when antibiotics were discovered, but the plant gained recognition again when doctors realized that some bacteria were resistant to certain antibiotics [source: American Cancer Society].

Despite its benefits as an herbal medicine, tea tree oil doesn't come without side effects, and it's important to use the oil correctly or you could end up in the hospital. Some reactions associated with tea tree oil are rather severe, and while it can be used to treat allergies, it can also cause them [source: National Institutes of Health].

As long as you know what to use it for, tea tree oil can be a good thing to have around the house. It can help improve your skin and get rid of athlete's foot at the same time. Just make sure to keep it out of the reach of children. If you want to find out more about the many uses of tea tree oil, keep reading.

People use tea tree oil for a wide variety of purposes. The reasons behind the oil's versatility are its antimicrobial properties, which is one way of calling it a disinfectant. Tea tree oil kills microorganisms that can cause diseases, and that makes it useful in treating everything from acne, burns and cold sores to fungal infections, insect bites and inflammation [source: Memorial Sloan-Kettering Cancer Center].

Experts believe that he anti-inflammatory properties of tea tree oil can help treat acne and histamine-induced inflammation caused by many allergies. Studies have shown that the oil may fight fungal species as well, which could help in the fight against athlete's foot, fungal nail infections and thrush. It can kill yeast as well, which makes it a potential treatment for vaginal yeast infections and other yeast- or bacteria-related ailments. If you are unfortunate enough to get a staph infection or genital herpes, tea tree oil might also be able to treat the virus associated with those conditions. On top of all that, it could be effective against lice, dandruff, dental plaque and bad breath as well [source: National Institutes of Health].

While there are many claims made about what tea tree oil can and cannot treat, many more studies are necessary before researchers make any definite conclusions. There's no doubt that the oil has some topical antiseptic and antifungal properties, but no one knows exactly how effective it is. Unfortunately, most studies conducted on humans up to this point have been inconclusive [source: Smith].

If you decide you want to give tea tree oil a shot, just make sure you're careful. There are several side effects associated with the oil, and some of them can be harmful. Keep reading to find out what they are.

Tea tree oil is one of hundreds of essential oils that are used in aromatherapy. People who practice this technique believe that the aromas produced by essential oils can treat everything from depression to high blood pressure. Although medical science hasn't proven many of aromatherapy's claims, people have practiced it since the early 20th century [source: WebMD].

Does Tea Tree Oil Have Side Effects?

Tea tree oil is considered an herb, which means the United States Food and Drug Administration (FDA) doesn't strictly regulate it. That's important to understand, because it's not necessary safe for everyone. Like anything that's used medicinally, there are side effects associated with tea tree oil, and some of them are rather serious. It can also cause allergic reactions in some people, and there are concerns about whether or not it should be used during pregnancy and breastfeeding as well.

Tea tree oil should not be taken orally. Even if it's taken in incredibly small amounts, it can cause severe reactions when ingested. Tea tree oil that's consumed can cause rashes, abdominal pain, diarrhea, drowsiness, confusion and, in some extreme cases, even induce coma [source: Mayo Clinic]. It's also not unusual for people using tea tree oil to complain of nausea or burning sensations.

Topical use of tea tree oil may also have its fair share of side effects. Using the oil directly on skin may cause rashes, blistering and itching in some people. Studies done with animals have also shown that large amounts of tea tree oil used topically can cause walking difficulties, weakness, muscle tremors, a slowing of brain function and poor coordination [source: National Institute of Health].

In 2007, Europe nearly banned tea tree oil on the grounds that it was unsafe. There are some concerns that the oil may interfere with normal hormonal functions, and there were even a few cases of young boys suffering from gynaecomastia, or the growth of breasts. After the boys stopped using the products containing the oil, their condition went away [source: Hill]. Most products have a tea tree oil concentration of less than 1 percent, however, and are considered safe.

See the next page to find out how to use tea tree oil properly.

The bacteria that causes acne, P. acnes bacterium, seems to be developing a resistance to the drugs we use to treat it. As a result fewer dermatologists are prescribing antibiotics to treat acne these days [source: Dahl]. Maybe tea tree oil will be the go to acne treatment of the future.

How to Use Tea Tree Oil

There are right and wrong ways to use tea tree oil. When it's used properly, it has the potential to improve your skin. But if it's used improperly, it could end up sending you to the hospital. As mentioned before, tea tree oil isn't meant to be taken orally. Doing so can have serious consequences. Some people will use tea tree oil as a mouthwash to get rid of bad breath, but those who do so should be extremely careful, because swallowing even a tiny amount can cause complications. Most people are probably better off sticking to topical use of tea tree oil.

If you want to keep a bottle of tea tree oil in your house, make sure it comes in a dark glass bottle. This will prevent light from penetrating the glass and breaking down the oil inside. To use the oil, simply place a few drops on a cotton swab and apply it to the affected area of your skin. Be careful not to use too much, or you could end up drying your skin out. Similarly, you don't want to use tea tree oil to treat conditions like acne if you're already using a product like benzoyl peroxide. Doing so could leave you with red, irritated skin, and you could end up in a situation worse than the one you started with.

For lots more information on tea tree oil and skin care, see the links on the next page.

The Secret of the Tea Tree

Although Australians have used the tea tree for thousands of years, the plant didn't gain worldwide fame until 1929, when Dr. Arthur Penfold, along with F.R. Morrison, published "Australian Tea Trees of Economic Value." Shortly after many studies were launched to study the plant and its possible benefits [source: Crawford].