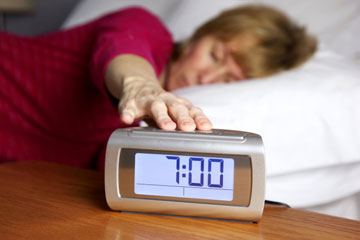 Don't hit the snooze too many times, or you'll have no time to wash your hair! See more sleep pictures.
Lilli Day/Getty Images

Think of those mornings when you hit the snooze button a few too many times, and you wake up with barely enough time to pull on some clothes and rush out the door to the office. Thanks perhaps to some perverse joke being played by the goddess of coiffures, those frantic occasions also tend to coincide with your worst cases of bed head, when the sebaceous glands attached to your hair follicles have unleashed an oil slick worthy of the Exxon Valdez. Your 100,000 to 120,000 or so hairs, weighted down with that oil -- which is really a combination of accumulated cell debris, chemical components of sweat and various tiny pieces of dirt picked up from the air -- are protruding every which way, creating a look reminiscent of the lead character in the Calvin & Hobbes comic strip [source: Zviak]. And you don't have the time to shampoo and rinse your rebellious locks in the shower and then carefully dry and reshape them.

Well, don't go to pieces. Hair care technology has an ingenious solution for you: dry shampoo, a water-free way to freshen and restyle your hair when you don't have time for a leisurely scrub. Just sprinkle or spray the preparation on your hair, wait a few moments for it to absorb the oil and other gunk that sticks to it, and then brush or blot it out. Dry shampoo enthusiasts, of whom there seem to be a growing number, insist that some of their favorite designer brands will give your hair a shiny, bouncy volume that's nearly as good as what a stint under the shower nozzle would accomplish [source: Kato]. Beyond that, the latest pearl of wisdom from hair care gurus is that a daily wash-and-rinse with a detergent shampoo may strip away too much natural oil from your hair, which is bad news for the 80 percent of Americans who wash daily [source: Bouillon]. Follicular fashionistas are reverting to the once-a-week hair-washing regimen of decades ago, when stylish dames went to salons. Between salon visits, dry shampoos are enough to keep you looking good, according to proponents [source: Grossman].

Are they right or are they just looking for once-a-week customers at their salons? What are the pros and cons of dry shampoo?

The practice of washing hair has been around since at least 2000 B.C., when the Egyptians made what may have been the first shampoo from citrus juice and used animal fats and plant oils to restore their locks' luster. That's probably also around the time that someone first uttered the phrase, "I just washed my hair and I can't do a thing with it." Over the centuries, people discontented with wet shampooing's tendency to make the hair dry and frizzy have experimented with all sorts of après-wash treatments. In 12th century Europe, for example, women favored a conditioner made by boiling dead lizards in olive oil [source: Scott]. They've also complained about the inconvenience, effort and sometimes unflattering results of wet shampooing and drying.

"The wet shampoo is exhausting in itself," a New York Times writer lamented in a 1909 article. The newspaper reported that turn-of-the-20th century Paris stylists had devised a bizarre alternative: They treated clients' hair with a mixture of gasoline and ether fumes, applied next to a window with an electric fan running to reduce the chance of an explosion [source: NYT].

Eventually, hair care mavens came up with a less dangerous solution. Instead of using detergent and water to strip away oil from the hair, they tried absorbing it -- basically, the same way that talcum powder sops up moisture from your skin. This wasn't an entirely new idea: People in Asia used sprinkled clay in their hair for centuries, and elegant ladies in 18th century France had powdered their hair to color it [source: Berg]. The 1918 edition of the American Journal of Pharmacy described one such dry shampoo preparation containing rice flour, with the instructions that it should be "sprinkled among the hair and brushed off with a clean brush, prolonging the draw of the brush to the end of the hairs" [source: American Journal].

Since then, various dry shampoo products on the market have utilized starches, clays, vegetable powders and various chemicals with oil removing properties [source: Bouillon]. Some can be sprinkled on the hair, while others come in the form of aerosol sprays. Dry shampoos were marketed enthusiastically in the 1970s, back when consumers were crazy about time-saving innovations. But their popularity waned after that [source: McCoy]. Recently, though, they've undergone a resurgence, which we'll discuss in the next section.

Why are dry shampoos gaining popularity? 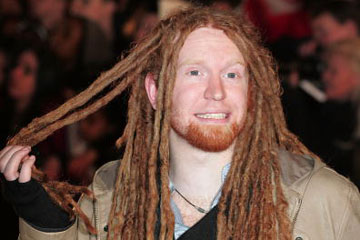 One problem with dry shampoos is that although they do remove a lot of the gunk from your mane, they don't get the hair quite as clean as wet shampooing [source: BeautyBrains]. The latter not only causes the oil to form droplets and slide off but also causes chemical changes in the oil-secreting process that slow down the mechanical spread of oil from your scalp to your hair shafts [source: Zviak]. "If your hair is really dirty," says beauty author Edain McCoy, "It may take so much dry shampoo to make it appear clean that you take away its natural shine, or cause it to look like your white, powdered head just popped out of the 18th century" [source: McCoy].

Nevertheless, the popularity of dry shampoos seems to be rising again. Recently, avant-garde hair care experts have resurrected a notion popular in generations past -- that daily shampooing does too much damage to the hair. They're championing the idea of going several days to a week -- or even longer -- between wet shampoos and using a dry shampoo in between. There are even some adherents who are giving up the wet stuff completely, in favor of the powder [source: Grossman].

Even if you like your regular wet shampoo, hair stylist Robert Vetica recommends dry shampoos for women with fine, easily damaged hair. Even if you use wet shampoo, he suggests using an aerosol dry shampoo as a rejuvenating touchup for your hairdo if you're planning to go out after a long day at work. "Your hair starts to lose its style as the day goes on," he writes. "Take the dry shampoo and give your head a good once-over, leave it for a few minutes to let it absorb all the oils from the day, and then give it a good brush through" [source: Vetica].

One potential drawback of dry shampoos is that the top designer labels, which retail on the Web for as much as $24 for a 3.2 ounce container, can be pricey, though less elegant brands are available for a fraction of that. Beauty expert McCoy suggests a cheaper DIY alternative: Cornstarch brush a small portion through your hair, being careful to rub it in around the roots [source: McCoy].