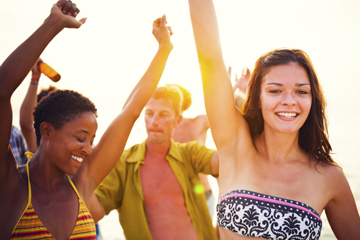 Do you sweat less if your armpits are shaved? See our underarm sweating image gallery.
Robert Churchill/iStock/Thinkstock

It was the sixth hour of a daylong summer outdoor music festival. The morning's breezes had fizzled and the afternoon heat hung low, hugging the hills and valleys of the acres-wide park in a sweltering embrace.

Sleeveless spectators waving their arms in appreciation -- few shocks of armpit hair among them.

If this was a fight against the follicle, then we were winning.

But why? Doubtless for most women, hairless armpits are about looks rather than health. But some might believe it lessens sweating. Is this true?

Humans have two primary types of sweat producers, known as eccrine and apocrine glands. Both types of glands are situated directly under the skin, but that's where the similarities end.

Eccrine glands cover most of the body and work as your own personal air conditioner. If your body becomes overheated, these glands empty an odorless solution made mostly of water and salt onto the skin's surface where it evaporates and cools the body.

Although the fluids excreted by eccrine and apocrine glands are initially odorless, both emit a distinct odor when metabolized by the bacteria living on the skin's surface. Apocrine glands, for example, release fluid onto the skin through openings in hair follicles where it can comingle with fluid that originated in the eccrine glands. This blend can be consumed by bacteria on the skin's surface. As the bacteria break down the protein and fatty acids in the sweat, body odor becomes the byproduct [source: Mayo Clinic].

So, does less hair mean less sweat? Find out on the next page.