It was the sixth hour of a daylong summer outdoor music festival. The morning's breezes had fizzled and the afternoon heat hung low, hugging the hills and valleys of the acres-wide park in a sweltering embrace.

Sleeveless spectators waving their arms in appreciation -- few shocks of armpit hair among them.

If this was a fight against the follicle, then we were winning.

But why? Doubtless for most women, hairless armpits are about looks rather than health. But some might believe it lessens sweating. Is this true?

Humans have two primary types of sweat producers, known as eccrine and apocrine glands. Both types of glands are situated directly under the skin, but that's where the similarities end.

Eccrine glands cover most of the body and work as your own personal air conditioner. If your body becomes overheated, these glands empty an odorless solution made mostly of water and salt onto the skin's surface where it evaporates and cools the body.

Although the fluids excreted by eccrine and apocrine glands are initially odorless, both emit a distinct odor when metabolized by the bacteria living on the skin's surface. Apocrine glands, for example, release fluid onto the skin through openings in hair follicles where it can comingle with fluid that originated in the eccrine glands. This blend can be consumed by bacteria on the skin's surface. As the bacteria break down the protein and fatty acids in the sweat, body odor becomes the byproduct [source: Mayo Clinic].

So, does less hair mean less sweat? Find out on the next page.

Unfortunately, shaving your armpits won't make you sweat less because the practice doesn't affect the glands that produce perspiration.

However, shaving armpit hair can help reduce body odor [source: Willacy]. Because hair is porous, it readily absorbs odors. If you've ever sat around a campfire or spent time in a smoke-filled bar, you'll know it doesn't take long for hair to absorb the smell. Underarm hair can trap moisture, too, creating a swampy environment that odor-causing bacteria revel in. So you may feel dryer (and therefore think you're sweating less) with shaved underarms.

If you're going to shave those pits, the best way to do it is to first expose the hairs to warm water; the heat and moisture will soften and draw out the follicle, making it easier to shave cleanly. Then, exfoliate to remove debris like deodorant or dead skin cells, and apply a shave gel or cream to lubricate and protect the skin. For underarm use, a razor -- even a disposable one -- should have a flexible, pivoting head with multiple blades.

Before you start shaving, lift your arm to touch the back of your neck. This will create a flat surface under your armpit and lessen the chance of getting nicked. And, because underarm hair sprouts willy-nilly, shave in all directions – up, down and sideways – before rinsing off the shave cream. When you're done, don't apply deodorant immediately because that can sting. Instead, allow the area to air dry first [source: SheFinds].

Removing body hair is nothing new. We've been doing it for more than 2,000 years.

Our Storied History of Hair Removal

Historians point to ancient Egypt as the genesis of hair removal, where a hairless body was the mark of a civilized existence. Men and women used beeswax, pumice stones and tweezers made of seashells in their follicle wars. Similar practices evolved in ancient Greece and Rome, where hairlessness was a sign of wealth. By the Middle Ages, women were following the lead of Queen Elizabeth I and using bandages soaked in vinegar and ammonia to remove facial hair. The ammonia was harvested from the urine of their pet cats [source: Barringer].

It wasn't until the early 20th century, decades after the invention of the straight razor, that the forerunner of today's armpit shavers began to take shape. In 1915, Gillette debuted the Milady Decolleté, the first razor marketed specifically for women's removal of unwanted hair. The armpit hair-removal practice, fueled by increasingly sheer materials and rising hemlines, was propagated by Gillette's widespread advertising campaigns and by the era's popular publications, including Ladies' Home Journal and Harper's Bazaar.

A dalliance into armpit hair as a sign of feminism in the 1970s didn't prevent later generations from shaving their armpits with gusto. Today, armpit hair is shaved, threaded, tweezed, sugared, waxed and lasered into obscurity [source: Harrison].

Although women have a long history with armpit hair removal, it's a relatively new phenomenon among men. Once relegated to the realm of competitive body builders and professional swimmers, the removal of male underarm hair is becoming more common.

While shaving may not make men sweat less, it may improve their social lives. At least one study discovered that women preferred smelling men's shaved armpits instead of their hairy counterparts. The odor of the shaved armpits was perceived as more attractive and less intense than unshaved -- even if the hair growth was only six to 10 weeks old. The newer the hair growth, the less significant were the differences between shaven and unshaven armpits [source: Kohoutova].

The next time you go on a blind date, just remember: it may be love at first smell. And your potential mate's diet could make all the difference. Turns out women in one study found the body odor of men who ate meat as off-putting. Their vegetarian counterparts, however, had body odor that was more pleasant and attractive [source: Kimball].

Armpit hair. It's not something that usually comes up in casual conversation, but it's important to your social life, nonetheless. When I began researching this topic, I was curious about whether shaving would reduce sweating. There are a few anecdotal accounts that it does, particularly in bodybuilding forums. Turns out, shaving armpits doesn't affect the amount of sweat being produced, but it can (at least temporarily) reduce odor. 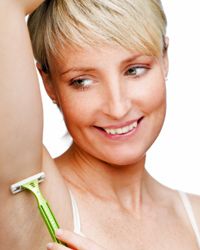