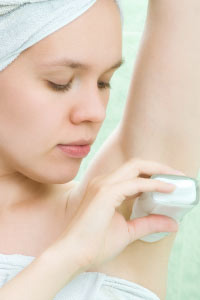 Most of us use antiperspirant on a daily basis, but could it have dire side effects?
© iStockphoto.com/Anatoly Tiplyashin

A toxic substance is capable of causing death or serious injury -- hence the skull and crossbones on labels of poisonous materials. Many people wear antiperspirant to avoid odor and wetness, but some people worry that using antiperspirant could be toxic to the body.

Antiperspirants are a common defense against embarrassing underarm wetness and the unpleasant aroma caused by odor-producing bacteria. By temporarily blocking sweat ducts, antiperspirants are able to reduce the amount of perspiration produced, which means less sweat in the underarm area [source: International Hyperhidrosis Society].

One of the sweat-blocking ingredients found in many antiperspirants is aluminum, an element that's also found in drinking water, cooking utensils, antacids and beer [source: WebMD]. In recent years, questions have been raised about whether the aluminum in antiperspirants can be absorbed into the body and contribute to the development of breast cancer. Aluminum compounds, such as aluminum zirconium and aluminum chloride, have estrogen-like properties. Because estrogen can promote the growth of breast cancer tissue, there's concern that aluminum may have the same effect when absorbed through the skin [source: National Cancer Institute].

A 2007 study analyzed the breast tissue of 17 breast cancer patients to measure aluminum content. The researchers found that the outer regions of the breast, close to where antiperspirant would be applied, held higher levels of aluminum. While this may sound alarming, it's important to note that the aluminum content of healthy breast tissue wasn't tested [source: Medical News]. More studies are under way, but so far, researchers haven't found a definite link between aluminum and breast cancer [source: American Cancer Society].

The dangers of aluminum, however, are still very real. People without fully functioning kidneys should be wary of using antiperspirant, which is why the U.S. Food and Drug Administration requires a warning label on all antiperspirants stating that people with kidney disease should consult a doctor before using them [source: American Association of Kidney Patients].

Another common concern about antiperspirants is that they may plug sweat glands and prevent toxins from leaving the body through underarm lymph nodes. However, there's no connection between your sweat glands and your lymph nodes [source: American Cancer Society]. In addition, your body doesn't get rid of waste through the sweat glands -- your kidneys and liver filter out toxins.

If you don't feel comfortable using an antiperspirant, simply use an aluminum-free deodorant -- it won't stop the sweat, but it will take care of the odor [source: Global Healing Center].

To learn more about antiperspirant, see the links on the following page.