How does the aging process affect driving ability? 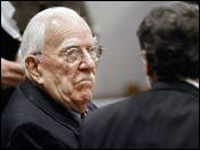 On July 16, 2003, 86-year-old George Weller crashed into a packed farmer's market in Santa Monica, California, at highway speed, killing 10 people and injuring dozens more. Found guilty of vehicular manslaughter with gross negligence, Weller was nearly assured of prison time. But on November 21, 2006, a California judge decided that Weller, now 89 and in very poor health, was too old and sick to go to prison and would receive fines and probation instead. Which brings us to the question that arises whenever an elderly person apparently mistakes the gas pedal for the brake pedal: Should drivers have to turn in their keys at a certain age?

­ The fact is, human beings age at different rates. Some drivers are as safe at 80 as they were at 40, while others probably should give up driving at 65. There are countless factors affecting an older person's safety behind the wheel. Driving is a complex task, and it involves many systems, both physical and mental, all of which need to be in top form in order to handle the quickly changing environment of the road.

One of most drastic physical changes that occurs with age is vision deterioration. Light reception is what enables us to see, and as we age, our eyes become less sensitive to light. Also, refocusing from one object to the next takes longer, so the "simple" task of checking the speedometer and then moving our attention back to the car ahead of us becomes a lot less simple. Older eyes are also more susceptible to glare because the lenses of the eyes thicken and the pupils shrink as we get older. According to the BCAA Traffic Safety Foundation, someone who is 55 takes eight times longer to regain normal vision after exposure to bright light than someone who is 16. Other visual systems affected by aging include peripheral vision, depth perception and color perception. An older person may have trouble distinguishing red lights from yellow lights or brake lights from running lights. Also, many seniors suffer from vision disorders like cataracts and macular degeneration.

All of this makes it more difficult to read road signs, react quickly to busy road conditions and accurately determine distance and speed.

Another function affected by the aging process is hearing. Hearing is an important part of safe driving -- it allows us to react properly to ambulance and police sirens and the honking horns of people trying to warn us of danger or mistakes. Thirty-three percent of people over the age of 65 have some degree of hearing loss. Over the age of 75, that number goes up to 75 percent. Motor skills also suffer with age. Muscles weaken, reflexes slow down and flexibility decreases. This all makes it harder to do things like turn your head to make sure it's safe to change lanes and quickly turn the steering wheel to avoid a collision. Also, arthritis is very common among senior citizens, making quick and fluid motion and maneuverability even more difficult.

Compounding these physical signs of aging are the inevitable mental issues that come up as we get older. With age comes slower cognitive reaction time -- an older person takes longer to process incoming stimuli than a younger person does. Also, many seniors have difficulty sleeping, making drowsiness a common problem on the road. And the confusion and disorientation associated with mild dementia and mild Alzheimer's, both common with increasing age, makes driving even more difficult for some seniors who probably don't recognize that they're unsafe because of the cognitive degeneration that comes with the mild forms of these disorders. (People with moderate or severe dementia and moderate or severe Alzheimer's should absolutely not be driving.)

And of course, someone with the physical and/or mental issues addressed here is hopefully on medications to alleviate the symptoms of their diseases and disorders. Many medications can interfere with safe driving by slowing reaction time, causing drowsiness and inducing confusion, making driving even more dangerous for everyone on the road. By the age of 85, a senior is more likely to be involved in a multi-car accident than a 16 year old; and seniors who are involved in car crashes are far more likely to die than a younger person involved in the same crash.

Recognizing the danger signs is the first step in solving the problem of unsafe older drivers on the road. Many seniors are excellent drivers, but some are not. Signs that you or a loved one may be an unsafe driver include:

If you know someone who you think needs to stop driving, see Helpguide: Senior Citizen Driving: Warning Signs and Helping an Unsafe Driver to Stop Driving for guidelines on how to address the topic. Driving is not just about transportation, it's also about independence, so asking someone to give up the privilege is a sensitive topic.

Probably the most logical solution to the issue of driving and old age is the same one in place to deal with the combination of driving and young age: driving exams. Just like a 16-year-old has to take a driving exam before he or she can get behind the wheel, putting in place mandatory re-examinations after a certain age could help separate the safe senior drivers from the unsafe ones and help prevent some avoidable accidents and injuries for everyone on the road.

For more information on age and driving safety and related topics, check out the following links:

The 'Perfect Storm' of Elderly Dementia and Guns
Decline of B.S. Meter Is One Reason Scammers Love Seniors
10 Low-impact Exercises for Seniors