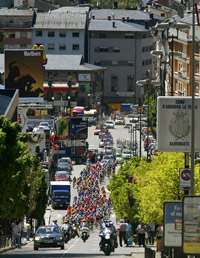 Cyclists competing in the Catalonia Cycling Volta in 2005, pass through Andorra. The tiny nation is home to the population with the highest life expectancy.
Cesar Rangel/AFP/Getty Images

Babies born in the United States in 2005 are expected to live an average of 77.9 years, according to a 2007 study by the national Centers for Disease Control and Prevention's National Center for Health Statistics. That's an increase of more than 30 years since 1900, when Americans were expected to live just 47.3 years [source: Medline Plus]. While the increase is impressive, America is not at the top of the list for life expectancy. Actually, the United States ranks behind 41 other countries.

Residents of Okinawa, a Japanese island, have long been endowed with high life expectancies. In 2002, there were 34.7 people 100 years or older per 100,000 residents, the highest life expectancy of any area in the world [source: USA Today]. People so envy Okinawans' vitality that doctors created a popular diet based on theirs to help others try to live longer. Still, while Okinawa may feature the highest population of centenarians -- people who are 100 years of age or older -- Japan is ranked second in life expectancy with an average of 82.

So to whom does the honor of first place go? It's a country you may never have heard of. The residents of Andorra, a tiny mountain nation in the Pyrenees between France and Spain, are expected to live to the ripe old age of 83.5. But why are Andorrans expected to live so much longer than anyone else? And how can you calculate something as unpredictable as how long someone will live?

Roughly the same area as New Orleans, La., or Warsaw, Poland, Andorra is home to around 72,000 people. It was established in 1278, but was a co-principality -- ruled jointly by Spain and France -- until 1993, when it became a democracy.

It was ge­nerally a poor country until after ­World War II, when Andorra reinvented itself as a tourist destination for skiing. Now, with a gross domestic product (GDP) -- the total of all of the goods and services produced in a year -- of $2.77 billion U.S., Andorra has what the CIA characterizes as a "well-to-do" economy.

But wealth alone doesn't grant a lengthy life expectancy. The United States is one of the world's richest countries, with a GDP of $43,500 per person. Andorra has a per capita GDP of $38,800 [source: CIA]. Read about other factors that affect life expectancy on the next page. 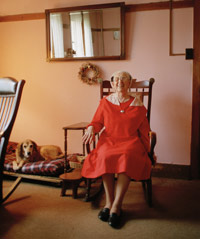 How to Have Fun After the Kids Are Grown
Does retiree dating have any health benefits?
Are people more likely to live to be 100 in certain parts of the world?