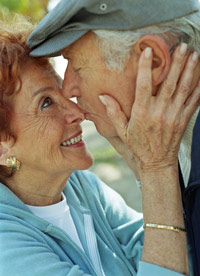 Ever notice how young adults and middle-aged people often seem to tower over some of their older relatives, like their great-great-grandmothers? More often than not, it appears older adults are short. While this loss of stature is attributed partially to shrinking bones and the other physiological effects of aging, some researchers s­ay this is no coincidence at all. They pose the theory that perhaps we see so many short-statured, elderly people because they are, in fact, living longer than their taller peers. So, are short people really living longer?

The correlation between height and longevity is a topic of much debate. Studies and evidence seem to point both ways. According to the World Health Organization, Japanese women have the longest average life spans worldwide, coming in at 86 years old [source: Washington Post]. Coincidentally, the average height of a Japanese woman between the ages of 75 and 79 is just 149.54 centimeters (58.87 inches) [source: Japan Statistical Yearbook].

On the other hand, we are a few inches taller than our ancestors of only a few generations past, and we tend to have improved life spans and overall health. In 1820, the average U.S. man lived to be approximately 39 years old [source: Steckel]. The World Health Organization reports that today, the average U.S. man lives to be about 75 years old [source: Washington Post].

Another interesting correlation is the relationship between standard of living measurements and height. Researchers have noted that during stressful times, such as periods of mass unemployment, people's heights tend to be shorter than during prosperous times [source: Steckel].

So who has the edge? Is it tall people, who seem to appear more often during times of prosperity; or short people, more likely to be the norm during times of stress? And in the long run, who will be the last ones standing at the finish line?

To find out the answer to this question and see whether your height, largely a genetic gift (thanks mom and dad), will affect when you will die, read the next page.

The Long and Short of It

People with primordial dwarfism are some of the smallest people on the planet, with average heights under 40 inches (100 centimeters). Visit PrimordialDwarfism.com to learn more about this rare form of dwarfism, which includes several subtypes and is thought to be caused by a recessive gene [source: Hall]. And what about their very tall counterparts? People who have acromegaly or gigantism (also called giantism) will grow very tall, usually because of problems with their pituitary glands and an overabundance of

The Short Answer about the Methuselah Gene

So is there truth to the claim that shorter people have longer life spans? The short answer is maybe. In only a few special instances can a direct relationship be claimed. In most situations, there is no catch-all predictor for how long a person will live.

Support of the short-stature, long-life claim can be found in people who possess what is being referred to as the Methuselah gene. Researchers have discovered that some people have a rare genetic mutation that decreases their cells' use of a particular growth hormone: insulin-like growth factor 1 (IGF1). As a result, these people tend to be smaller and also live a longer-than-average life span. Many animals' sizes are also controlled by differences in their IGF1-release, with a corresponding increase or decrease in life span. For example, smaller breeds of dogs have less IGF1 than larger breeds and tend to live longer.

But the final analysis? Height (or the causes of height variation) may be a factor, especially in some instances, like for those people who carry the Methuselah gene. However, there are many other dynamics involved in determining how long a person will live. These factors can include genes, lifestyle, birth weight, early childhood care and nutrition, vaccinations, antibiotics, diet and income level.

These factors seem to have an interweaving effect on what the quality of life will be like for however many years a person will live. For instance, some researchers studied the medical records of large populations of people who lived a few centuries ago. Those studies found strong links between a person's health as a fetus and baby (the first two years of life) with his or her state of health as a middle-aged adult. These links were stronger than factors such as someone's lifestyle as an adult. People born and raised under favorable conditions show substantially lower rates of chronic and fatal diseases later in life.

Two studies looked at people whose mothers were pregnant during times of strife, like Holland's Hunger Winter during World War II or 1918's influenza pandemic, compared with those who were pregnant right before or after these stressful times. The offspring of the former group were more likely to have chronic diseases upon reaching middle age than their peers of the latter group [source: Kolata].

So for now, people w­ill have to be content with whatever height they stand at and hope for the best. For more information relating to aging and human health, visit the links on the next page.

Why Call It Methuselah?

One of the Bible's pre-flood patriarchs and Noah's grandfather is Methuselah. He holds the distinction of being the oldest man whose age is mentioned in the Bible. According to biblical text, Methuselah lived to the ripe old age of 969! Descended from Adam and Eve through their son Seth and his son Henoch, Methuselah eventually met his maker during the great deluge.

Are baby boomers healthier than previous generations?
Is there an anti-aging gene?
What are the stages of empty nest syndrome?