Sleep Problems and the Elderly 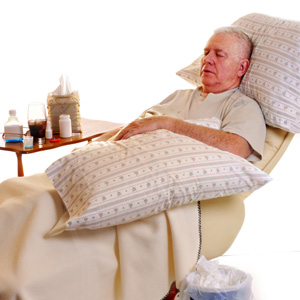 Even the healthiest elderly people find that their sleep habits change. Sleep tends to become much lighter as we age, with less time spent in deep sleep cycles, and also shorter, with people over the age of 65 sleeping about half an hour less. Awakening during the night becomes more frequent, so that on a given night, a healthy older person sleeps only about 85 percent of the night [source: Kolata]. The aging tend to get sleepier earlier in the evening and awake earlier in the morning. It also may take longer for an older person to fall asleep, which, in combination with the decrease in hours of sleep and the shifted schedule, may make aging people feel as though they suffer from insomnia. In reality, they need less sleep, but may be lying in bed waiting to sleep as they used to.

These are all normal changes brought about by aging. While they may take some time to get used to, you should ultimately be able to get a satisfying night's sleep. However, it's important to note that getting older doesn't mean that you're due for a whole night of tossing and turning, and that insomnia is a very real sleep complaint for the aging. Insomnia and other sleep problems tend to occur most often in those people who have health conditions or who take medications.

Conditions such as heartburn, arthritis, cancer, Parkinson's and depression are but a few of the disorders and diseases that can leave a person in too much pain to sleep. Medications used to control blood pressure or treat cancer and depression can also have an effect on your shut-eye. The combination of aging and being overweight puts you at additional risk for problems like sleep disordered breathing, which includes sleep apnea and snoring, and movement problems, such as restless legs syndrome (RLS) and periodic leg movements in sleep (PLMS).

We mentioned that even the healthiest elderly individuals report waking up in the middle of the night; that may be for periods of about three to 10 seconds. However, the most common reason that older adults wake up in the middle of the night is the need to go to the bathroom, and studies have shown that it's the most common cause of a bad night's sleep. On the next page, we'll examine the consequences of these sleep problems and consider some tips for these tired adults.