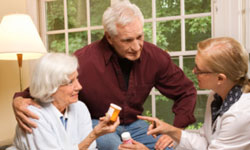 As the 78 million baby boomers born between 1946 and 1964 in the United States approach retirement, they will continue to shape society -- even in old age [source: U.S. Government Accountability Office]. Despite their fierce social and personal independence, it's likely that many boomers will rely on others in their later years of life, especially for long-term health care, or services that offer assistance with daily activities such as bathing, walking or eating.

According to the U.S. Administration on Aging, long-term health care applies to people with chronic illness or disabilities, with the goal of maximizing their independence and ability to function when full independence is no longer an option [source: U.S. Administration on Aging]. It's estimated by the year 2020, nearly 12 million people will need long-term care, and this number is sure to grow with the aging baby boomer population [source: Medicare.gov].

But how will baby boomers change long-term health care?

The group has already influenced current approaches to long-term care with its attitudes toward aging and financial preparedness for care in later life. Although we'll talk about baby boomers as one group, it's important to view them as diverse individuals with unique health histories and resources.

Read on to learn what boomers' projected lifespan has to do with long-term care.