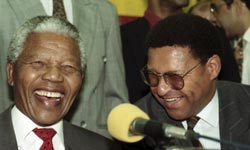 Known for his struggle against apartheid, the system of racial segregation that was in place in South Africa since 1948 [source: BBC News], Nelson Mandela was a revolutionary who didn't see the fruits of his labor until much later in life.

Mandela was part of the African National Congress (ANC), a group that campaigned against apartheid. After 69 blacks were shot dead by police during the Sharpeville massacre in 1960, Mandela and like-minded members of the ANC turned from nonviolence and began a campaign of economic sabotage instead. He was arrested and convicted of sabotage in 1962 and sentenced to life in prison in 1964 [source: BBC News].

In 1980, his friend and fellow lawyer Oliver Tambo launched a campaign to free Nelson Mandela, and 10 years later South African president F.W. de Klerk did just that. In 1994, when he was almost 76, Mandela was elected president of South Africa in the first election that was open to all races in that country's history [source: BBC News]. On his 80th birthday he married his third wife Graca Machel.