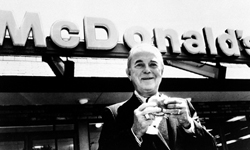 All the young whippersnappers in business school may have you thinking that entrepreneurship is for the young, but consider the example of Ray Kroc. Kroc, born in 1902, spent 17 years of his adult life as a paper cup salesman, and then he spent approximately another 17 peddling the Multimixer, a machine that could craft five milkshakes at once.

The invention was originally intended to appeal to drug stores with soda fountains, but Kroc had better luck selling the invention to hamburger joints and drive-ins. That meant Maurice and Richard McDonald, who owned a few hamburger restaurants in California and Arizona, were perfect potential customers for Kroc. The brothers McDonald purchased 10 Multimixers, so Kroc went to see them in action. Impressed by this restaurant that sold cheap hamburgers, french fries and milkshakes quickly to a hungry public, Kroc suggested that the brothers franchise their operation on a national scale. The McDonalds were interested, but didn't know who could manage all those stores. Kroc volunteered himself for the job.

At the age of 52, despite battles with diabetes and arthritis, Kroc set out to build the McDonald's brand. Seven years later, he convinced the brothers to sell out their shares, and he became the owner of a franchise that would sell more than a billion hamburgers by 1963 [source: Pepin]. Kroc continued to be involved in McDonald's operations until his death in 1984.