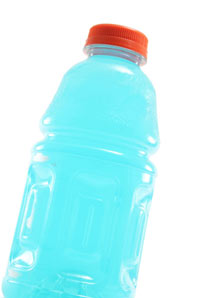 Chugging a sports drink is one way to replace electrolytes lost through sweating.
© istockphoto/jpschrage

Athletes and trainers know that the body loses salt through sweat and that it's important to replace it. That's why many athletes drink sports drinks that contain salts before, during and after exercise to minimize things like muscle cramps that are associated with salt imbalance.

But salts are important not only for athletes. The human body needs various kinds of salts to be healthy and to function normally, and it has to maintain them at certain levels in different body compartments. Serious salt imbalances, like those that occur with dehydration, may lead to heart and nervous system problems that, unless they are rapidly resolved, can result in a medical emergency.

The foods we eat and fluids we drink contain mineral salts, which form electrolytes when they dissolve in the fluids in our bodies. They're present in blood, urine, in the fluid inside the body's cells and in the fluid in the space surrounding the cells. Sodium, calcium, chloride, magnesium and potassium are the most common electrolytes in the human body. They're essential for many heart, nerve and muscle functions. They also play an important role in keeping fluid levels normal in different body compartments.

­The body has to perform delicate balancing acts to keep water and electrolyte levels just right. For example, whenever the sodium level dips too low, the kidneys are stimulated to produce more urine, which restores the balance by lowering the amount of water in the blood. And when the sodium level gets too high, thirst develops, stimulating the person to drink. A hormone is also secreted by the brain in response to thirst that causes the kidneys to produce less urine. Together, these effects result in dilution of the sodium and the restoration of balance.

Learn about electrolyte imbalances on the next page.

To learn more about electrolytes and keeping them in balance, follow the links on the next page.

An electrolyte panel may be ordered as part of a regular checkup at the doctor's office. Electrolyte levels are sometimes used to monitor treatment for conditions like heart failure and high blood pressure. Abnormal electrolyte levels can give the doctor clues about a number of illnesses.