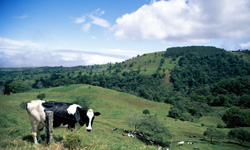 Both the meat and milk that comes from pasture-fed animals is an excellent source of omega-3. (More about the milk part on the next page.)
Brand X Pictures/Thinkstock

Starting with pasture-raised animals lets us explain how omega-3 acids enter the food chain. It also shows how tweaking conventional production methods can affect nutrition in the food supply.

The omega-3 acids in most plants are alpha-linolenic acids (ALAs). ALAs have short chains of carbon. Humans and animals convert them into two long-chain forms that are usable by their bodies: eicosapentaenoic acids (EPAs) and docosahexaenoic acids (DHAs). The process isn't terribly efficient, however: Only about 5 percent of the ALA is converted. Thus, foods from animals -- in which the ALA has already been converted into usable forms -- are generally more efficient sources of omega-3 than foods from plants.

Conventionally raised meat is fed corn. Corn oil is among those mentioned on the last page as being high in omega-6 acids, and the same holds true for the corn kernels. Pasture-raised animals subsist largely on grasses, which not only lowers their omega-6 levels but also boosts their levels of omega-3. In one test involving cattle, the ratio of omega-6 to omega-3 dropped from almost 9:1 in corn-fed to under 2:1 in grass-fed animals. In another experiment, the numbers dropped from more than 13:1 to less than 3:1 [source: Daley, et al]. Goats, sheep and bison have all shown similar results. Poultry scientists are working to achieve the same results with chicken and other birds.

Studies have also shown that grass-based diets for beef cattle lower the levels of two saturated fatty acids, myristic and palmitic, in their meat. These fatty acids tend to increase blood cholesterol levels in people who consume them [source: Daley, et al].