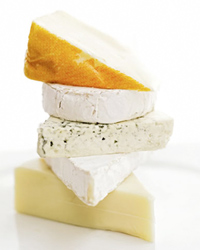 Before you schedule a daily cheese party, remember that all fatty foods (even those with beneficial omega-3) should be eaten in moderation.
Stockbyte/Getty Images

Like beef cattle, cows (and goats and sheep) that are grass-fed produce milk with higher amounts of omega-3. More accurately, these animals are forage-fed, a term that also includes legumes and other non-grain feedstuffs. Also like beef cattle, the levels of fatty acids will vary with the breed of animal, the type of grass they eat, where they're raised and the time of year the milk was produced. For example, animals that are raised in colder climates where grass isn't available year-round might be given soy meal or silage, such as corn stalks and cereal grasses, during the winter. Animals fed such mixed diets produce milk with higher ratios of omega-6 to omega-3 acids. The less grass they're fed, the higher the ratio [source: Clancy].

One factor that can't be quantified is pasture management. Graziers (farmers who graze their livestock) need to know how to keep pastures healthy to supply their herd's needs. New findings are adding to their store of knowledge and guiding management practices.