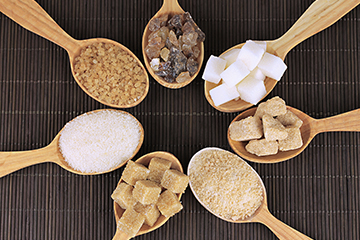 The chemical compositions of brown and white sugar are nearly identical.
belchonock/iStock/Thinkstock

To most everyone's dismay, eating refined white sugar can negatively impact us. Its effect on our bodies has been the subject of hundreds of studies, all of them painting a bleak picture of what happens to people who regularly consume sugar (read: almost all of us). Refined white sugar's been linked to obesity, heart disease, hypertension and cancer, and some scientists and dietitians have gone so far as to call it poisonous.

In an effort to avoid white sugar, many of us reach for the brown variety. Brown usually equals healthier: less refined, less processed, right? It holds true for rice and bread, so why not sugar?

Surprise! Brown sugar is more processed than white sugar. They're exactly the same through the refinement process, until the very end when brown sugar is created by coating white sugar with a small amount of molasses. (Earlier in the process, oddly enough, molasses is removed from the raw sugar crystals — themselves also sold commercially, often in brown packets.) Otherwise, the two types of sugar are chemical near-matches. They're both mostly sucrose (white sugar is 99.9 percent sucrose, while brown is 96 percent sucrose), and the molasses gives brown sugar one single calorie more per teaspoon [source: Sugar Association].

Our bodies process both white and brown sugar the same way. Sucrose is a disaccharide that's half glucose and half fructose (fruit sugar). Our bodies are normally efficient at converting glucose into energy, but when glucose attaches to fructose it becomes more difficult to process. Sucrose contains only scant amounts of vitamins or nutrients, so the digestive system doesn't process it — the sugar sails on through to the duodenum, the first part of the small intestine, where it's converted to glucose and fructose and absorbed into the bloodstream. While glucose is metabolized all over the body, fructose is metabolized in the liver -- and when the liver has too much fructose to deal with, it starts converting it to fat. Researchers have linked liver fat to that scary list of ailments above.

So, while it's true that both white and brown sugar are "pure" — they're without additives or preservatives, and the sugar cane they come from is a natural source — that doesn't necessarily translate to "healthy." And because they're basically the same thing, you can often substitute brown sugar for white in almost any recipe. Just don't do it thinking that brown is a healthier, more virtuous choice.