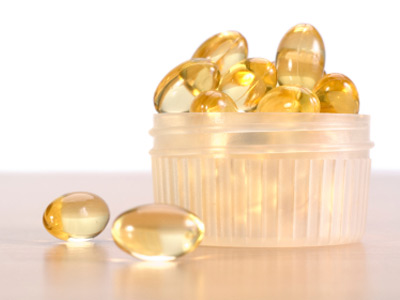 From the depths of the Arctic Sea to the shelves of stores around the world, cod liver oil is one of many fish oils considered to be beneficial to health and wellness. Harvested from fish that populate the glacial waters of Norway, cod liver oil is an age-old remedy for what ails you, including everything from colic and rickets to high cholesterol [source: Rajakumar].

Extracted from the cod fish, whose prized meat contains less than 1 percent fat, cod liver oil is exactly what it sounds like: the oil from a cod's liver [source: Kurlansky]. Traditionally, cod liver oil was simply scooped off the top of barrels of cod livers, but with today's health standards, production has changed and regulations are in place. Fish oils currently on the market have been purified by removing mercury and other harmful substances [sources: Moeller, Weil].

Cod liver oil, like other natural fish oils, is considered to be high in vitamins, especially A and D, and Omega-3 acids. But cod liver oil differs from other oils in that it contains less saturated fat [sources: Monroe Street Medical Clinic].

If you're wondering just how beneficial cod liver oil might be, you're not alone. Omega-3s and fish fats seem to make headlines in the news fairly frequently. In this article, we'll look at the potential benefits and reported side effects of cod liver oil and find out how it's being used to treat dry skin.

Long before pharmaceutical companies, it was common for people to turn to natural remedies -- such as cod liver oil -- to alleviate their pains, illnesses and afflictions. But even today, some researchers are promoting this alternative to manufactured medicine because of its inexpensive cost and health advantages.

Some believe that cod liver oil can be used to soothe the aches and pains caused by arthritis. Typical arthritis treatments, such as aspirin or ibuprofen, also help to ease the throb of swollen joints, but extended use of these medications can put one at risk for heart disease and stroke. However, this hasn't been proven true with cod liver oil [source: Macrae].

In addition to helping reduce inflammation in joints, cod liver oil has been used to protect the brain from Alzheimer's disease and as an alternative treatment for cancer sufferers. There has been no verification that cod liver oil -- or fish oil of any source -- prevents, cures or treats these diseases, so you should always consult with your doctor(s) before starting a new supplement or dietary regimen [source: UC Berkeley].

With respect to type 1 diabetes, cod liver oil has been shown to potentially decrease the likelihood of developing the disease if taken within the first year of life [source: Stene]. Researchers compared cod liver oil to other types of vitamin D supplements to reach this conclusion. The study also examined whether or not cod liver oil had any impact when ingested by the mother during pregnancy, which it did not.

Next, we'll take a look at some of the possible side effects and negative aspects of this seafaring wonder.

What Good is Vitamin D?

Cod liver oil is a good source of vitamin D, but what does this mean for our health? Vitamin D helps with the building and maintenance of healthy bones, and may even help fight osteoporosis. It also encourages proper cardiovascular function. Unfortunately, vitamin D, which we can also get through exposure to the sun, isn't a big part of most diets [source: American Dietetic Association].

Chances are you've seen an old cartoon in which one of the characters is forced to down some cod liver oil. The comical face of disgust that quickly follows the dosing is not just a result of clever cartooning. One of the obvious negatives of cod liver oil is that it can smell, well, fishy. For those who take this dietary supplement as a gel capsule, pill or liquid, the scent may vary by brand and form, and be more than you've bargained for in your quest for improved health. Nasty breath, upset stomach and even vomiting can result after ingesting cod liver oil [source: O'Mathuna].

No one wants a medicine that's worse than the cure, and if nausea isn't bad enough, much like other dietary supplements, there have been reports of tainted products. For example, in 2002, two batches of cod liver oil supplements being sold in England contained hazardously high levels of dioxin and PCBs -- chemicals that have possible links cancer [source: BBC]. As our oceans become more polluted and the amount of junk that fish have to filter out of their systems increases, researchers have studied the links between fish consumption and serious illnesses, including cancer. Also, for people who might be susceptible to bleeding, including those who take anticoagulants, scientists are looking into a link between cod liver oil and a higher risk for bleeding [source: Bays].

As with any sort of supplement, it's important to weigh the side effects against any of the benefits. Speaking of benefits, there's one that deserves its own special section. Read on to find out the unique relationship between cod liver oil and your skin.

For those who believe that fish oils may be a healthy, personal choice but don't want to deal with the bad aftertaste or burps, here are a few tips and tricks for combating a case of gastrointestinal distress:

While dry skin may seem like a mere nuisance to some people, sometimes it's too severe to ignore. The redness, flaky skin and itchiness can just about drive you crazy. There might never be an actual cure for dry skin. However, some research claims that fatty fish oils just might help reduce its effects.

One simple way to test this hypothesis is to use a topical treatment -- such as a cream -- that contains cod liver oil. Like lotions and moisturizers you may already be using, these creams should be applied after bathing or washing, since they need moisture to be most effective. You may also need to use them repeatedly throughout the day in order to get the best results.

Another option you might try is taking cod liver oil supplements to relieve your dry skin. Some sufferers of psoriasis, a serious skin disease that can cause scales of dead skin to form on the body, have reported reductions in itch, redness and flaky appearance of the skin after taking such supplements. But the National Psoriasis Foundation warns people to pay attention to the total amount of vitamins A and D they are ingesting when taking cod liver oil to avoid taking too much [source: National Psoriasis Foundation].

To learn more about cod liver oil and related topics, visit the links on the next page.

How Much Is Too Much?

As you know, cod liver oil contains vitamins A and D, and taking cod liver oil supplements adds these vitamins to your diet that may or may not be already saturated with them. So how much is too much? Here is some pertinent information regarding cod liver oil and vitamin A from the "UC Berkeley Wellness Guide to Dietary Supplements"

Can Foods Really Bolster Your Immune System?
Everything You've Read About Vitamin D Is Wrong
How Vitamin D Works