Flax Seed: What You Need to Know

Browse the article Flax Seed: What You Need to Know 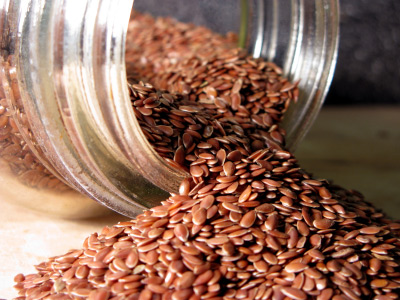 Flax seed plays three primary roles in nutrition -- as a digestive aid and as a good source of antioxidants and omega-3 fatty acids.
©iStockphoto.com/Eric Naud

When it comes to health, good things often come in small packages. The flax seed is no exception.

For much of recorded history, the flax plant has served the human species with great distinction. The stalk is used to make linen and its shiny golden brown seeds are used for animal feed as well as human consumption.

The seeds produce a vegetable oil known by two names: linseed oil and flax oil. Linseed is used to make paint thinner, wood finish and other industrial solvents. Flax oil is a tasty and nutritious condiment, ingredient and supplement. (Like that old "Saturday Night Live" skit said, "It's a floor wax and a dessert topping.")

Flax seed plays three primary roles in nutrition. First, the seed, powdered or ground, is rich in dietary fiber, both soluble and insoluble, making it a useful digestive aid. Second, it is one of the best source of lignans, a nutrient with antioxidant properties. Third, the seed contains a high concentration of omega-3 fatty acids. These fats are termed "essential" because they are necessary for survival yet cannot be produced by the body. Among the essential fatty acids, omega-3 is the type that the mainstream American diet lacks the most.

These factors make the little seeds a powerful and time-honored medicine. It is said that centuries ago, Hippocrates prescribed it for digestive problems and inflammation of the mucous membranes. Recently, thanks to the alternative medicine community, Americans have been rediscovering the flax seed. Its oil has become a very popular health food product, although natural health guru Andrew Weil recommends consuming the ground seed rather than the oil, because pressing oil removes the fiber and, usually, the lignans [source: Weil].

Flax is the subject of a fair amount of scientific research and its virtues are hotly debated. Read on to discover its benefits.

A wealth of scientific literature has established the importance of polyunsaturated fatty acids in our diet. Our bodies thrive when we eat foods with omega-6 and omega-3 fats in the proper proportion, roughly two to one. But in the modern American diet, the usual ratio is more like 20:1 because of things like over-processing of foods, decreased fish intake and a spike in sugar consumption [source: Healing Daily].

Some nutritionists believe an omega-3 deficiency may be the root of a host of common maladies, from arthritis to eczema, asthma to heart disease, breast cancer to macular degeneration [source: Ho]. The anti-inflammatory effect of omega-3 molecules in the body can make them useful in preventing and slowing disease.

The beauty of flax seed is it contains more of a certain omega-3 fat, alpha-linolenic acid (ALA), than any other food source [source: Schardt]. Within the body, ALA converts into small amounts of DHA and EPA, the main omega-3 components of fish and fish oil. ALA plays a crucial role in our metabolism, helping our bodies regulate heart rate, blood pressure and dilation of our blood vessels.

Studies have shown flax seed oil can lower cholesterol and reduce high blood pressure. Flax also appears to be good for cardiovascular health and preventing heart disease. And because it inhibits inflammation in the joints, it is used to treat gout and lupus.

Omega-3 acids have also been found effective at soothing skin inflammations related to acne, eczema, and psoriasis. These fatty acids help keep harmful substances out of the cells in our bodies and help form the lipid sheath that insulates our nerves and speeds the conductive ability of our nervous systems [source: Sundene].

Because of its high fiber content and laxative effect, flax seed has been used to treat constipation and hemorrhoids. The lignans found in flax seeds also appear to help correct hormone imbalances, such as those that cause menopausal symptoms [source: Herb Wisdom]. These properties of lignans have led to animal studies on the possible value of flax seed in fighting breast cancer [source: Medline Plus].

Flax seed also has less appealing qualities. Read on to find out what they are.

Johanna Budwig, a German biochemist, was one of the first to note the health value of omega-3 fats. She had great success reducing tumors in cancer patients by giving them daily doses of a blend of flaxseed oil and a dairy product called quark, similar in composition to cottage cheese. The dairy protein makes the fats water-soluble and more easily absorbed [source: Budwig Flax].

Too much of a good thing can be bad for you. People who've taken flax seed in large doses have reported minor but annoying side effects like stomachache, flatulence and diarrhea.

Because of its laxative effect, people suffering from bowel disorders are advised to avoid consuming flax seed in crushed or powdered form but can take the oil if they really want to try the supplement [source: Medline Plus].

Although the omega-3 fatty acids in flax seeds help reduce swelling, which is generally a good thing, they can also slow the formation of blood clots and increase bleeding. That's why those taking blood thinning medications like Coumadin or aspirin, or similar herbal remedies like gingko biloba and saw palmetto, should consult their doctor before adding flax seed to their diet [source: Herb Wisdom].

Women with health problems related to hormonal imbalance, such as endometriosis, should also be cautious about taking flax seeds because they can mimic the biological effects of estrogen. It is also not recommended for women who are pregnant or breastfeeding [source: Medline Plus].

Some proponents of the supplement advocate taking flax seed supplements, but warn they should not be used exclusively. Overuse of flax, in the absence of other fat sources, can lead to an omega-6 deficiency, which can cause health problems just as severe as a lack of omega-3 [source: Erasmus].

Flax seed has the potential to do much more than balance out your fatty acids. Continue reading to learn about the seed's effect on prostate cancer.

Flax seed has its detractors, those who believe that its beneficial properties have been oversold and its negative features swept under the rug by commercial hype. The critics agree that flax seed is a good source of omega-3 but claim it's much easier to get these fatty acids by eating fish. That's because our body has to go through a more complicated process to convert the omega-3 in flax seed into the goodies we need. To get the same amount of omega-3 from eating 3 ounces of salmon, for example, you'd have to drink gallons of flaxseed oil [source: Greene].

One out of every six American men will develop prostate cancer, according to the American Cancer Society. And every year, about 27,000 men will die from it [source: Science Daily].

Because studies have shown a link between a lack of omega-3 and prostate cancer, some health experts believe taking flax seed oil can give men the essential fatty acids they need to prevent prostate inflammation and related problems of male impotence and infertility [source: Herb Wisdom]. But the studies on flax seed's effectiveness for treating prostate cancer have yielded conflicting results.

In one study at Duke University, a sample of men already diagnosed with prostate cancer who were scheduled to have their prostates removed were given three tablespoons of flax meal a day for a month prior to surgery. The control group didn't receive any. The study found the group taking flax had lower rates of cell division, and higher rates of cancer cell death [source: Schardt].

But a larger study at the National Cancer Institute found that high levels of omega-3 might actually advance prostate cancer. In that study, researchers analyzed the diets of 48,000 men over 14 years, including 3,000 who developed prostate cancer. Those who had the highest levels of ALA in their diets were also those with the most advanced cases of prostate cancer [source: Thompson]. Other studies have reached the same conclusion that ALA stimulates growth of prostate cancer cells [source: Erasmus].

But some experts note that ALA -- not flax seed -- was singled out as the culprit in these studies. They dispute the results, saying that tests involving isolated fatty acids in the lab don't always reflect how our bodies react when the fatty acids are eaten in whole foods that contain thousands of other nutrients. [source: Erasmus].

For now, the debate continues. But read on to find out what researchers do agree on -- flax seed and skin care.

The lead researcher of the Duke University study admitted in an interview that they had originally planned to study fish oil but switched to flax seed after the male subjects complained they "were burping it up and saying they tasted fish" [source: Garvin].

Studies have found that both omega-3 and omega-6 fatty acids can help relieve skin conditions like eczema, acne and psoriasis. An adequate supply of these lipids in the diet can help your skin retain moisture, produce the proper amount of natural oils and protect itself from exposure to outside irritants [source: Benabio].

That's because essential fatty acids ensure that cell membranes do their job of letting the right nutrients in and expelling the bad stuff. When this system breaks down, the cells lose water, leading to dry, cracked, inflamed skin [source: Herbal Powers].

Thus, the balance of fats within the cells determines the health of the skin, as well as hair and nails. For this reason, taking an omega-3 supplement like flax seed might help maintain that balance and prevent things like eczema.

In their quest for beauty, women tend to suffer from these skin problems more often than men do, because they tend to adopt low-fat diets that deprive them of essential fatty acids. Ironically, these fats are one of the most important factors in having healthy, radiant skin [source: First Vitality].

For more on flax seed, visit the links on the next page.