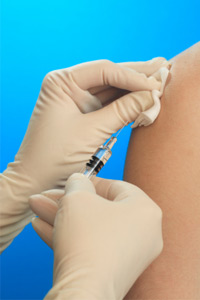 Could an injection of hydrogen peroxide cure what ails you?
©iStockphoto.com/Ivan Ivanov

Chances are it happened to you as a child -- you fell off your bike and got scraped up. If you used hydrogen peroxide for those cuts and scrapes, you might remember the tingling, bubbling and fizzing. But what was it really doing?

The tingling, bubbling and fizzing means the hydrogen peroxide is cleaning the wound -- hydrogen peroxide has great antibacterial qualities. These qualities give hydrogen peroxide many uses for improving the body's health. Hydrogen peroxide fights against parasites, viruses, bacteria and yeast. Health care providers have taken this knowledge about hydrogen peroxide's properties and applied it to places inside the body, such as the immune system. Practitioners claim that hydrogen peroxide therapy can positively affect conditions like asthma, high blood pressure, human papilloma virus, degenerative spinal disc disease, multiple sclerosis, arthritis and leukemia [source: Kennedy].

On the next few pages, we'll look at some of the conditions most often associated with hydrogen peroxide therapy and whether the treatment can be useful for them. We'll start with human papilloma virus (HPV).

The human papilloma virus, also known as HPV, is a sexually transmitted infection that can affect both men and women. The virus can cause warts to appear on the hands, feet or genitals, which can be mildly bothersome if and when they emerge. Generally, most HPV infections do not pose any health dangers, but HPV can potentially cause cancer in some high-risk patients. Planned Parenthood states that, currently, there is no known treatment to target and cure HPV [source: Planned Parenthood]. Despite this knowledge, some people claim that hydrogen peroxide might be a good cure for HPV.

Sites supporting these claims propose applying hydrogen peroxide after shaving off or pulling out warts caused by an HPV infection. However, such practices are not only painful but also not recommended because there's no proof that hydrogen peroxide can treat HPV, although some studies are underway [source: Singh and Singh]. Shaving and removing warts can also lead to scarring and infections. Instead, it's best to visit a qualified doctor in order to determine proper treatment for HPV warts [source: Dorads].

Click to the next page to learn about how hydrogen peroxide therapy could be an alternative treatment for cancer patients.

A girl from the mid-19th century is said to have witnessed an image of the Virgin Mary while sitting in one of the famous baths in Lourdes. Some people travel many miles in order to visit this special bathhouse in southwest France. When tested, the water was found to have a high level of hydrogen peroxide in it [source: Kennedy].

Though there were advocates of hydrogen peroxide therapy for treating cancer in the late 1800s, current evidence in the scientific world doesn't back up ideas that hydrogen peroxide therapy is effective in treating cancer. There is conflicting evidence as to whether or not the link between cancer and low oxygen levels in the cells even exists. Some doctors believe that the oxygen supply to these areas is sufficient, but the cells don't have the power to utilize the oxygen [source: Farr and Josephs]. This conflicting medical advice is something to keep in mind when searching for an alternative cancer therapy.

Read the next page in order to understand the specific method of taking in hydrogen peroxide intravenously.

The Root of Gray Hair

According to one recent study, hydrogen peroxide might be at the root of the problem behind graying hair. As levels of an enzyme called catalase drop, naturally occurring hydrogen peroxide, which would otherwise be broken down, builds up in the hair shaft -- thereby stripping that hair of its natural color and turning it gray [source: Hitti].

There are several ways to receive hydrogen peroxide therapy. Some people suggest drinking a diluted form of it, while others might recommend inserting it rectally, vaginally, or through the nose or the ears [source: American Cancer Society]. Though these are all possibilities, the most common method of receiving hydrogen peroxide is through intravenous injection.

Intravenous hydrogen peroxide therapy was first brought en masse to the medical field at the First International Conference of Bio-oxidative Medicine in 1989 [source: Farr and Josephs]. Since then, many people stand behind the supposed power of hydrogen peroxide IV infusions. Treatments typically last an hour and a half. They can vary in frequency, as some people might request only one treatment and others might want an infusion five days a week [source: Kennedy].

Regardless of treatment frequency, intravenous hydrogen peroxide injections can have several dangers and serious side effects, the most severe being death. In South Carolina, a doctor of alternative medicine administered hydrogen peroxide to a patient who then died within five days of that injection [source: Liptak]. Other side effects of IV therapy are vein inflammation, red streaks up and down the arm, shortness of breath, chills, nausea and general aches [source: Farr and Josephs]. Despite these known side effects, some people claim that there are very few dangers when administered IV therapy by a professional [source: IV Therapy].

So while treating that childhood bicycle scrape may have not been a bad idea, you should consult your physician before you begin any sort of hydrogen peroxide therapy.

To learn more about hydrogen peroxide, visit the links on the following page.

What Does Science Say About the Health Benefits of Cordyceps?
Oil Diffusers Make Your House Smell Great, but Are They Safe?
Is Colloidal Silver Helpful or Harmful?