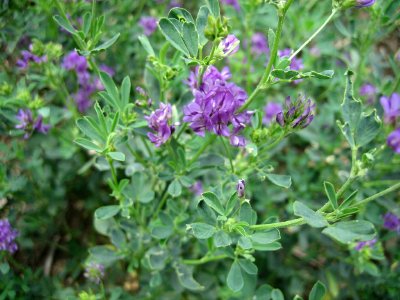 ©
Alfalfa is used for a variety of herbal remedies including lowering cholesterol and treating arthritis symptoms.

You're probably only familiar with the sprouts of this tall, bushy, leafy plant, but the entire plant is valuable. The sprouts are a tasty addition to many dishes, and the leaves and tiny blossoms are used for herbal remedies.

Alfalfa contains substances such as isoflavones and coumestans, which bind to estrogen receptors in the body. Estrogen binds to these receptors like a key in a lock. If the estrogen level is low and many of these "locks" are empty, the constituents of alfalfa -- which resemble estrogen "keys" -- bind to them instead and increase estrogenic activity. Alfalfa's estrogenlike "keys," although similar to estrogen, are not nearly as strong. If estrogen levels in the body are too high, the estrogen "keys" fill up some of the locks, denying the space to estrogen, thereby reducing estrogenic activity. Because alfalfa may provide some estrogenic activity when the body's hormone levels are low and may compete for estrogen-binding sites when hormone levels are high, alfalfa is said to be hormone balancing.

Both alfalfa sprouts and leaf preparations help lower blood cholesterol levels. The saponins in alfalfa bind to cholesterol and prevent its absorption. Alfalfa also has been studied for its ability to reduce atherosclerosis, or plaque buildup, on the insides of artery walls.

In one study, 15 patients who took an alfalfa seed preparation for eight weeks, without changing diet or exercise levels, had a 17 percent reduction in cholesterol and a significant reduction in LDL ("bad") cholesterol associated with atherosclerosis.

Physicians who practice traditional Ayurvedic medicine (the main system of health care in India) use alfalfa for poor digestion and to relieve the symptoms of arthritis. Other traditional medicine practitioners use alfalfa for anemia and to increase breast milk production in women who have difficulty breastfeeding their infants.

Alfalfa is available in capsules, which you may take daily as a nutritional supplement. One or two capsules a day is recommended. You also can find bulk alfalfa leaves, which you can infuse to make a nourishing tea.

Excessive consumption of alfalfa may cause the breakdown of red blood cells. Canavanine, a constituent in alfalfa, may aggravate the disease lupus. Canavanine produces a lupuslike disorder in monkeys who were fed diets high in alfalfa. Canavanine is an unusual amino acid found in the seeds and sprouts but not in the mature leaves. Thus, alfalfa tea and capsules made from leaves would not be expected to contain canavanine.

Avoid alfalfa during pregnancy because of its canavanine content and hormonally active saponins. If you are pregnant, you may put a few sprouts on a sandwich now and then, but avoid daily consumption of alfalfa or its supplements.

Side Effects of Alfalfa

Jennifer Brett, N.D. is director of the Acupuncture Institute for the University of Bridgeport, where she also serves on the faculty for the College of Naturopathic Medicine. A recognized leader in her field with an extensive background in treating a wide variety of disorders utilizing nutritional and botanical remedies, Dr. Brett has appeared on WABC TV (NYC) and on Good Morning America to discuss utilizing herbs for health.This information is solely for informational purposes. IT IS NOT INTENDED TO PROVIDE MEDICAL ADVICE. Neither the Editors of Consumer Guide (R), Publications International, Ltd., the author nor publisher take responsibility for any possible consequences from any treatment, procedure, exercise, dietary modification, action or application of medication which results from reading or following the information contained in this information. The publication of this information does not constitute the practice of medicine, and this information does not replace the advice of your physician or other health care provider. Before undertaking any course of treatment, the reader must seek the advice of their physician or other health care provider.Before engaging in any complementary medical technique, including the use of natural or herbal remedies, you should be aware that many of these techniques have not been evaluated in scientific studies.   Use of these remedies in connection with over the counter or prescription medications can cause severe adverse reactions. Often, only limited information is available about their safety and effectiveness. Each state and each discipline has its own rules about whether practitioners are required to be professionally licensed. If you plan to visit a practitioner, it is recommended that you choose one who is licensed by a recognized national organization and who abides by the organization's standards. It is always best to speak with your primary health care provider before starting any new therapeutic technique.

To make this herbal tea, infuse one tablespoon per cup of boiling water and steep for 15 minutes. You may drink several cups a day. Add lemongrass, mint, or other flavorful herbs to improve the flavor.

A Former Naturopath Blows the Whistle on the Industry
Oil Diffusers Make Your House Smell Great, but Are They Safe?
Is Colloidal Silver Helpful or Harmful?