Why do I have black gums? 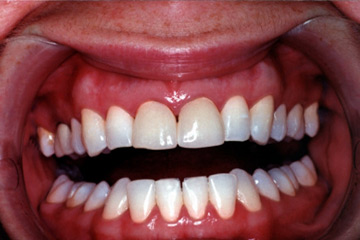 Most people have pink gums, but if yours are darker than average, a dentist can figure out why.
J. Frederick May/Getty Images

Smile for the camera! Your toothy grin should be shared with the world -- but what if you don't want to because of the way it looks? If your gums appear dark or blackened, for example, this condition might be due to heredity, ethnic background, certain medications or diseases, or an advanced form of periodontal disease or gingivitis. In most circumstances, black gums aren't painful, but they can make you feel uneasy about your appearance or too uncomfortable to smile. When the root of the problem is periodontal disease or gingivitis, the condition can be quite painful and demands medical attention.

Most people have pink gums; however, just as no two fingerprints are the same, some variation in gum coloration is also normal. Sometimes the gums may appear dark or black due to a higher concentration of melanin or imbalances in pigmentation. This condition occurs most commonly in darker-skinned races, but it can occur in any race. Since excessive sun exposure causes melanin in the skin to darken, it can even cause melanin in the gums to get darker.

Some diseases are marked by an increase in melanin production. Just to name a few, the rare endocrine disorder Addison's disease, the hereditary intestinal disease Peutz-Jeghers syndrome and the bone ailment Von Recklinghausen's disease can all cause patches of darkening and discoloration that can affect the gums as well as other parts of the body.

Smoking, certain medications such as minocycline, antimalarial agents, or tricyclic antidepressants, or metal-based crowns or fillings may also cause gum discoloration.

If dark-colored gums make you feel self-conscious and you're looking for a more pleasing smile, don't despair -- they can be treated. The dark-colored layer can often be removed through a surgical procedure that reveals the pink-colored tissue underneath. After the healing process, only some of the pigmentation returns -- and a lighter-colored gum remains.

Some dentists and periodontists are now offering a cosmetic bleaching procedure to lighten gums and improve their aesthetic appearance. This painless, in-office procedure alters the melanin pigment permanently, so gums appear pink and healthy.

Black gums may also be a symptom of acute necrotizing periodontal disease, also known as black gum disease. The black coloration is a result of dead tissue, or necrosis. Other symptoms include spontaneous bleeding, the rapid onset of pain, a foul odor from the mouth, and gum tissue that appears blunted between the teeth, not the typical conical shape seen in healthy gums. Factors that may contribute to this condition include stress, poor nutrition, smoking, and viral infections such as HIV. If left untreated, the disease can spread to the cartilage and bones surrounding the teeth.

Fortunately, this can be treated with antibiotics or by surgically removing the damaged tissue. Oxygen therapy, used in conjunction with systemic antibiotics, can also help reduce the damage to gum tissue caused by harmful bacteria.

Another condition that makes gums appear dark is acute necrotizing ulcerative gingivitis, which can cause a grayish film to build up on the gums. Caused by poor dental hygiene and rarely seen today, this disease is commonly called "trench mouth" because World War I soldiers often developed the condition after spending an extended amount of time on the battlefield and not taking care of their teeth.

For more information on dental care, follow the links on the next page.

Can people regrow teeth?
Is gingivitis deadly?
How to Celebrate Your Baby's First Tooth