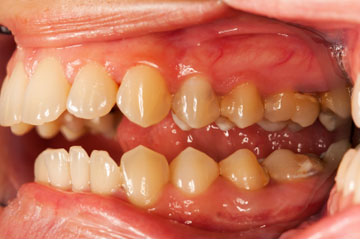 If you have gingivitis, your saliva contains bacteria that can be transferred to other people.
©iStockphoto.com/Alexandru Kacso

Maybe you have a toothy grin. Maybe it's slyly crooked or shows off your pearly whites or your bright red gums ... wait, bright red gums? Bright red, shiny gums, swollen gums, gums that are tender when you touch them, bleeding gums and mouth sores are all symptoms of gingivitis, not of a pretty smile. And if these symptoms are left untreated, they can lead to tooth loss.

Gingivitis, specifically, is most common in the mouths of people in their 30s and older, but may begin as early as adolescence. The most common cause? Plaque. Plaque is a mixture of food debris, mucus and bacteria. Allowing plaque and tartar to build up long term on teeth irritates the gums, and the bacteria in plaque begins to produce toxins that cause the gums to become inflamed and infected.

Your risk of developing gingivitis and other periodontal diseases increases if any of these statements apply to you:

Genetics also play an important role in whether or not you develop gum disease, and if you're genetically predisposed, your risk jumps six-fold [source: American Academy of Periodontology]. And then there's the role of that bacteria. Research suggests that the families and partners of people with periodontal disease have a higher risk of the disease, not necessarily because of the genetic link, but because gingivitis-causing bacteria is actually transferred among family members through saliva.

There are more than 500 different species of bacteria living in our mouths, and while most are considered friendly, there are a few types known to increase your risk of developing gingivitis and other forms of periodontal disease, including A. actinomycetemcomitans and P. gingivalis [source: Ciancio]. This injurious bacteria lives on our teeth, in the pockets of our gums and on our tongue. And as it turns out, we're not very good at keeping our bacteria to ourselves, at least when it comes to those closest to us.

While research is still preliminary, studies have found links suggesting that people with periodontal disease pass along the disease-causing bacteria through saliva. Children under the age of 3 years are 26 times more likely to test positive for A. actinomycetemcomitans in their mouths if their mothers test positive for that bacteria. And spouses are no safer from transmission than kids. Multiple studies have found oral bacteria transmission through person-to-person, mouth-to-mouth contact, and one study specifically showed that if one spouse is colonized with A. actinomycetemcomitans and P. gingivalis, that spouse has a 20-to-30 percent likelihood of passing that bacteria on to his or her partner [source: Asikainen].

It's no wonder that periodontal disease, not cavities, is the No. 1 cause of tooth loss among adults in the U.S. [source: American Academy of Periodontology]. The good news, though, is that if you have gingivitis-causing bacteria in your mouth, it doesn't guarantee that you'll develop gum disease. Other factors such as oral hygiene habits, personal habits, health and heredity -- not just bacteria alone -- determine whether or not your gums will become infected.

And if your mouth does become home to P. gingivalis? More good news: Gingivitis is reversible. Because periodontal disease is caused by bacteria, you might want to reach for antibiotics to kill the disease, but treatment most frequently consists of a process called scaling and root planing, two therapies that help control the bacteria and infection and deep clean the gums. Prescription medications such as mouthwashes and gels that contain antibiotics and antimicrobial ingredients may help with long-term disease control, and there are also surgical treatments available for treating persistent or severe disease, including flap surgery (the deepest gum-cleaning therapy) and bone and tissue grafting.

The American Dental Association finds that about 71 percent of the time, mom is to blame for her baby's cavities. No, it's not the mother's diet, or even a matter of breast feeding versus bottle feeding. According to the American Dental Association, it's the behind-the-scenes transfer of cavity-causing bacteria -- usually Streptococcus mutans -- to their children through sharing utensils, sharing food and blowing on food to cool it down, as well as through kissing.

Professional Fluoride Treatment
What are smart bracket braces?
Can big teeth be shaved down?