5 Reasons Why Flossing Is Extremely Important

by Matt Cunningham
Prev NEXT
4

Flossing Protects Your Gums, Too 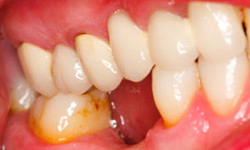 Plaque and tartar buildup on the teeth where they meet the gums can lead to puffy, reddish inflammation called gingivitis.
©iStockphoto.com/Alexandru Kacso

It's easier to understand the role that flossing can play in good oral hygiene by seeing how teeth are situated in the gums and jaw. At the root of this structure -- literally -- are the bones of the lower and upper jaws. The jaws anchor the teeth by their roots, and the bones and roots are covered by the soft, sensitive tissue of the gums [source: ADA].

The places where the gums and teeth meet are where flossing plays its major role. Tiny particles of food can get lodged here, and plaque in this area will harden and accrete over time to form tartar, a thick deposit that only the dentist can remove with a scraper. Tartar buildup can lead to gingivitis: red, swollen gums that are the first stage of gum disease. If left unchecked, the bacteria-laden tartar and plaque can spread even deeper below the gum line, causing periodontitis: severe gum disease characterized by severe inflammation and eventual tooth and bone loss [source: AAP].

Floss can get into the space between the teeth and gums, removing much of the food and plaque that a toothbrush or mouthwash can't move.