Should you floss before or after brushing? 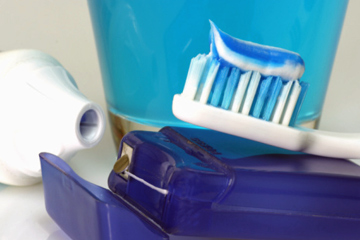 Which came first: the brush or the floss?
Hemera/Thinkstock

When you were a kid, you were probably reminded by your parents, or at least your dentist, to floss your teeth once a day in addition to the standard twice-daily brushing. This is because they knew that flossing is just as important as brushing for the health of your mouth. In fact, without flossing, you're leaving behind a lot of harmful bacteria that your toothbrush simply cannot reach.

Floss gets to places your toothbrush can't, removing small bits of food trapped in between your teeth and gums. If you don't get all this food out, it forms bacteria. Those bacteria will eventually turn into plaque, which yields to tartar and eventually some form of gum disease. At first, your gums might become sore, swell or bleed when you brush. After some time, this can lead to gingivitis and then periodontitis, also known as advanced gum disease.

Whether or not you floss in the morning or evening is up to you. Some people prefer bedtime so their mouth is nice and clean before they hit the hay for a good night's snooze. The official American Dental Association's (ADA) stance is that it doesn't really matter if you floss before or after you brush. However, flossing before you brush can clean out the spaces between your teeth and allow for more coverage and penetration by the fluoride in your toothpaste.

5 Reasons Why Flossing Is Extremely Important
What is dental plaque?
Can toothpaste reverse gingivitis?

Who Brushes Their Teeth in the Shower?
Dental Problems and Bad Breath
Dental Crowns