Why is there fluoride-free toothpaste? 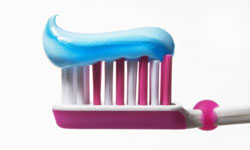 Fluoride is a common ingredient in toothpaste, but some believe it does more harm than good.
Monika Ribbe/Photographer's Choice/Getty Images

Have you ever noticed the warning on a tube of toothpaste about the dangers of ingesting fluoride? You may not have -- it's inconspicuous and looks nothing like the brazen warnings that appear on goods such as cigarettes and other tobacco products. But why is it there? Well, besides being a helpful additive that's been proven to prevent tooth decay, fluoride is also a deadly toxin. When placed in that context, it's easy to see why some people are ditching toothpaste containing this supposedly beneficial chemical in favor of fluoride-free brands. But don't be so quick to judge. Research is divided on the subject, and many (including the federal government) believe the benefits of fluoride far outweigh its dangers. It's a complicated situation, but, like a toothbrush on plaque, we'll break it down for you.

Our relationship with fluoride started peacefully enough. In the mid-20th century, municipalities across the United States began adding fluoride to their drinking water in a process known as fluoridation, and the chemical started appearing in toothpaste shortly thereafter [source:McCoy]. In fact, the Centers for Disease Control and Prevention (CDC) cites fluoridation as one of the 20th century's 10 greatest public health achievements in the United States. By the turn of the millennium, the water supplies of over 144 million people were fluoridated, which was credited with a 40 to 70 percent reduction in tooth decay in children and a 40 to 60 percent decrease in tooth loss for adults [source: CDC]. Today, approximately 72 percent of Americans with homes connected to a community water supply receive fluoridated water [source: Pew].

There are two primary ways fluoride prevents decay. It cripples bacteria in plaque, inhibiting its ability to produce acids that weaken teeth. Fluoride also remineralizes areas where acid damage has already occurred [source: Crosta]. Since it's a toxin, however, moderation is key to reaping fluoride's benefits without experiencing a downside. Luckily, the most common result of overdosing on fluoride is nowhere near fatal.

People who receive too much fluoride often wind up with dental fluorosis. This is a permanent discoloration of the teeth and can make your choppers appear spotted or streaked. It happens in varying degrees of severity, depending on how much excess fluoride you take in. However, this is a purely a cosmetic problem, and it has no effect on a person's health.

A recent study found that two out of every five adolescents in the U.S. have dental fluorosis. As a result of the finding, the U.S. Department of Health and Human Services announced in Jan. 2011 that it's lowering the recommended level of fluoride in water supplies nationwide [source: CBSNews].

The recommended amount of fluoride been debated for years, as have the chemical's negative effects. Reputable sources on both sides of the debate make opposing claims: Some say there's no serious downside to fluoride, while others blame the chemical for all sorts of problems, including allergies, lower IQs, Alzheimer's disease and cancer [source: Pope, Fluoridation].

While the effects of fluoride may be disputed, the fact that a lot of people are getting too much of the substance is commonly accepted. In response to the rising rates of dental fluorosis and the growing public demand for products that don't include the potentially toxic additive, companies have started marketing and selling fluoride-free toothpaste.

Where to Find Toothpaste That's Fluoride-free

Fluoride-free toothpaste is sold in many of the same places toothpaste with fluoride is sold. Some brands that sell a paste without the chemical include Burt's Bees, Tom's of Maine and Dr. Ken's Toothpaste. You can find additional fluoride-free varieties or recipes for homemade versions online, too.

Hand, Foot and Mouth Disease
What is a dental scaler?
Can big teeth be shaved down?