Is a Waterpik better than flossing? 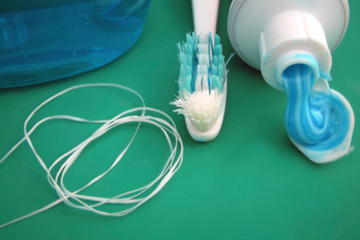 Is your floss on its way out?
iStockphoto/Thinkstock

The best way to win the war against tooth decay and gum disease is to brush twice a day and floss at least once a day. Although flossing used to mean rubbing a strand of string floss across and around the teeth and gums, today there's another option: the water flosser. Water flossers like the Waterpik use the power of water pressure to loosen and remove food particles and bacteria. A variety of removable tips can also help perform special cleaning tasks like brushing in and around dental appliances like braces, and cleaning deep into periodontal pockets.

One of the areas where the Waterpik wins over standard string flossing is in removing biofilm. Think of biofilm as a coating of super plaque, a tough-to-clean bacterial layer that can cause tooth decay and be very hard to strip away. Biofilm typically develops as a result of poor brushing habits. Regular brushing isn't always effective at removing it, and string flossing doesn't provide the coverage or power to tackle biofilm effectively either. The Waterpik uses pulsating, pressurized jets of water and a gentle brushing or probing action to blast biofilm off teeth in bursts of rapid compression and decompression that are effective at removing biofilm and eliminating embedded plaque and tartar [source: University of Southern California].

That's not the only way water flossers like the Waterpik can match or beat string flossing in tooth and gum-cleaning power. A study conducted by the University of Nebraska in 2005 found that water flossers are more than 50 percent more effective at controlling gingivitis, an inflammation of the gums that's often the forerunner of more serious gum disease. Flossers also reduce the risk of bleeding gums during cleaning by up to 93 percent [source: Shibly].

There's something else to consider, too. A flossing study of children and young adults with braces found that using a Waterpik was not only more effective at removing food particles and bacteria from orthodontic appliances than string flossing, but the participants enjoyed using the water flosser more than the manual method. Flossing isn't a very popular personal care activity. Only 13.5 percent of Americans claim they floss daily, and anything that increases a person's likelihood of flossing regularly equates to less gum disease and fewer cavities.

Good oral health is important for your smile and for your overall health, too. Ongoing medical research in a number of disciplines suggests that infections of the mouth can cause illness in other parts of the body, including the cardiovascular system [source: American Academy of Periodontology].

5 Odd Health Benefits of Brushing Your Teeth
Can fluoride make your teeth yellow?
How to Teach Children to Brush Their Teeth