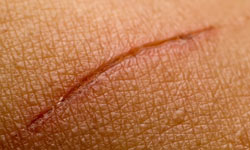 Early on, scars may appear dark, but they usually lighten over time.
©iStockphoto.com/pistolseven

For some, the act of self-harming -- often through cutting or burning -- serves as a means of coping with emotional distress or trauma, even if the source of the trauma happened long ago. Those with major depression or eating disorders sometimes do this as well.

Even if the underlying issue has been long-resolved, bringing up the subject of self-inflicted scars -- and how best to heal them -- can be extraordinarily difficult, since you'll likely bring attention to how you got them. The scarring itself is simply a biological function of your skin repairing damage by forming new collagen growth. While scars begin forming almost immediately after a person is wounded, they can also take a year or two to reach their final state [source: Alford]. Early on, scars are typically dark and raised, but over time they will probably lighten in color and flatten out.

If you're willing to bring up the subject with your doctor, he or she can help you sort through various options for diminishing the severity of scars. Injections of a steroid called triamcinolone, for example, help the skin absorb the collagen and limit how much collagen is ultimately produced during the long healing process. For older scars, treatments with aloe vera may help. Silicone sheets applied over scars -- a technique often used following mastectomies or breast reconstruction surgeries -- also can help in healing. Dermabrasion -- removing the topmost layers of the skin in order to give it a smoother appearance -- may also be an option.

It's important to get professional medical advice about which treatment is best for you, rather than trying to self-treat. For instance, covering your scars with vitamin E may prevent rather than promote healing, contrary to popular belief [source: Lickstein]. And if self-harming is an ongoing problem for you, a doctor can also direct you toward counseling and other treatment options, to help prevent further scarring of either the emotional or physical variety.