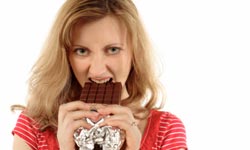 Chocolate cravings during PMS are just one thing that's been attributed to women's hormones.
iStockphoto/Thinkstock

When it comes to female behavior, hormones often get the lion's share of the blame (or credit, depending). They're the reason why she snaps and bites people's heads off for no apparent reason, but also why she cries while watching that sappy movie that she's already seen dozens of times. Hormones are why men are supposed to know to bring her flowers and chocolate during "that time of the month." They're why women need to be romanced in order to feel like getting romantic. And they're why she gets hot flashes and night sweats later in life.

Those are the accepted truths when it comes to women's hormones, but not all of those things are true of every woman. And even if you think that you're really in touch with a woman, you might still be clueless in some areas. Knowing about women's hormones is important because they not only affect behavior, they also figure prominently in women's overall health (and not just sexual health, either).

Have no fear -- after reading our list of 10 things that men should know about women's hormones, you'll be that much more in tune with the women in your life.