Is a Period Necessary? 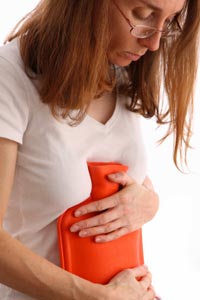 Many women may empathize with this woman suffering menstrual cramps.
© iStockphoto.com/kkgas

It's estimated that women living today have 450 periods in a lifetime, which is about three times as many as our early ancestors [source: Kalb]. Today, women begin menstruating much earlier but have children much later. They also have fewer children and breastfeed for shorter periods of time, comparatively. Today's women also liv­e much longer. When you add up how much time our hunter-gatherer ancestors spent pregnant and breastfeeding, then they likely had only about 160 periods in a lifetime [source: Clark-Flory].

Historically speaking, then, the amount of menstruating that a woman does today seems a bit excessive. Is there any benefit to these increased troubles? It turns out there are a few cardiovascular benefits to those having menstrual cycles not regulated by the pill. Though menstruation is necessary to rid the body of the uterine lining that has built up in preparation for pregnancy, it also eliminates excess iron, which can be a risk factor for cardiovascular disease. Additionally, the menstrual cycle includes two weeks where women demonstrate significantly reduced blood pressure. As a result, women have fewer heart attacks and strokes while they're in their fertile years [source: Kelley]. An evolutionary biologist also posited that monthly menstruation flushes bacteria out of the reproductive system, serving as a form of protection for STDs and infertility [source: George].

Some doctors, however, point out that by monthly menstruating, a woman's body is regularly enduring something that it was never meant to endure. This has health impacts both large and small. PMS and its attendant symptoms represent the smaller side of the spectrum, though to some women, calling such a condition "small" is a joke. A majority of women have experienced one or more premenstrual symptoms, which include headache, cramps, fatigue, mood swings, depression and insomnia. Studies indicate that these symptoms are often enough for women to miss class or work, or if they do show up, to exhibit decreased productivity. Women may also suffer from dysmenorrhea, which includes severe cramping, nausea and diarrhea [source: Henig]. Menstruating women are also at risk for anemia, endometriosis and ovarian cysts [source: George].

On the larger side of the scale is cancer. As far as cells go, ovulation and menstruation is a fairly violent process. During the menstrual cycle, hormones cause immature eggs, or follicles, to develop. At the point of ovulation, one follicle produces an egg, which scars the ovary. If the egg remains unfertilized, then the built-up uterine lining, or endometrium, is shed as a menstrual period, which in turn creates more scars. These scars cause cells to divide and regenerate, and if something goes wrong with that process, then you're looking at ovarian and endometrial cancer. When a woman is pregnant, thus giving those symptoms a rest, her risk for ovarian cancer at some point in her lifetime drops by 10 percent [source: Gladwell].

By preventing ­ovulation, then, oral contraceptives also lower the risk for ovarian and endometrial cancer. In a 2000 article in the New Yorker, writer Malcolm Gladwell posited that the pill's inventor, John Rock, might have had an easier time getting the Catholic Church to approve his invention had he marketed it as an anti-cancer pill rather than as a family planning tool. On the next page, we'll consider how oral contraceptives affect the menstrual cycle.

Can antibiotics affect menstruation?
10 Reasons You Might Not Know You're Pregnant (Until You're in Labor)
PMS 101