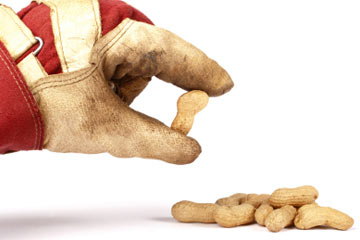 Of the many things parents are encouraged to freak out about, the fear that a peanut will cross their toddler's lips is way up there. Parents are told not to let their kids have peanut products before age 3, due to the risk of the child having a serious or even fatal allergic reaction.

As if peanuts weren't getting enough bad press in the 24-hour news cycle, alongside the inflated dangers of shark attacks and cell phones, a 2009 salmonella outbreak with origins in a Georgia peanut plant killed nine and left hundreds of consumers sick, prompting a massive recall of peanuts by the U.S. Food and Drug Administration (FDA). By this time, the lethality of the common peanut became part of the American public consciousness.

In recent years, there has been growing alarm over food allergies -- especially allergic reactions to peanuts -- in children. Fatal allergic reactions in children at school have raised concern in parents and school administrators alike. Currently, around 1 in 3 schools ban some type of food for allergy reasons [source: Broussard]. Congress has gotten involved with the creation of an act -- the Food Allergy and Anaphylaxis Management Act of 2009 -- that calls for schools to act in ways that counter the risk of serious food allergy reactions. Some professional sports teams have even sponsored "no-peanut night" promotions.

Simultaneous with the increase in warnings about food allergies is an effort to develop treatments for them. Should a new drug be developed that can protect people -- especially children -- against food allergies, its use could prove literally to be a lifesaver, and the new drug would almost be guaranteed to meet a very receptive and concerned consumer population of parents.

While food allergies are certainly of great concern, there have been questions regarding the methodology and even possible manipulation of statistics in order to heighten the sense of worry, thus creating more demand for a treatment.

And if you've seen someone have a serious food allergy reaction, you wouldn't doubt the potential danger. Reactions can cause the allergic person to develop hives, have difficulty breathing and require emergency medical attention. There are about 150 deaths each year caused by various food allergies [source: Schwartz].

So what causes food allergies? Continue reading to find out.

When the Immune Systems Attacks...a Peanut 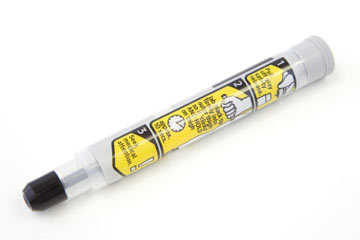 An epi pen is an important part of the allergy arsenal.
©iStockphoto.com/BanksPhotos

Under normal conditions, your immune system is on guard against foreign invaders, known as antigens. These can be viruses, bacteria or any harmful substance. When an invader is found, the immune system releases protective proteins -- known as antibodies or immunoglobulins -- to attach to other immune cells called mast cells. When the offensive object encounters this mast cell/immunoglobulin hybrid, the antigen attaches to it. The mast cell then releases histamines and other chemicals to destroy the antigen. A food allergy -- or any allergy -- occurs when something triggers your immune system to have an abnormal response against a harmless substance that your body mistakes for a harmful agent.

True antigens prompt the response of one of four different types of immunoglobulin: G, M, A or D. Allergic reactions, however, prompt the production of a unique immunoglobulin, known as E, or IgE (immunoglobulin E). It's the presence of IgE that identifies a reaction as an allergic reaction. The half-life of IgE is 2.3 days, so if you have recurring symptoms over a period of days or weeks, it's due to continued exposure and continued manufacture of IgE [source: Ishizaka].

Peanuts are the most likely food allergen to cause a life-threatening situation in the form of an anaphylactic reaction, which is basically a multisystemic meltdown that can put a person into a state of shock. For every five deaths related to a food allergy, four are caused by peanuts [source: Schwartz].

Food allergies aren't the only things that cause anaphylaxis. It can be triggered by penicillin, pollen and stings from insects such as bees or hornets. One treatment of anaphylaxis is a dose of epinephrine that helps end the state of shock by boosting blood pressure and opening up the airways in the lungs. Epinephrine can be administered (or self-administered) via injection into the thigh with a small penlike device that many food-allergic children and adults carry with them at all times.

Anaphylaxis can cause severe reactions to many parts of the body at once, including the throat, lungs and skin. However, anaphylactic reactions aren't always so severe, sometimes causing nothing more than a skin rash or mild asthma.

But it's possible to have allergylike symptoms and feelings after eating without any need to reach for the epinephrine pen. We'll learn how and why in the next section. 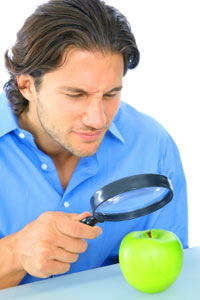 Did you know that more adults are allergic to fruits and veggies than they are to peanuts?
©iStockphoto.com/visi.stock

Food intolerance occurs far more often than food allergy, but shares many of the same symptoms as (such as nausea or stomach pain). The key difference is that food intolerance is a response of the digestive system, while food allergy derives from the function of the immune system.

A negative reaction to milk could either be lactose intolerance or milk allergy. In some cases, milk allergy, which is one of the most common food allergies in children, can resolve itself entirely as children age. Lactose intolerance, which is more commonly developed in adulthood, is a lifelong condition. While other allergies -- such as wheat allergy -- may also diminish with time, some can affect you throughout your entire life.

An increased alarm and awareness of food allergies likely brings with it an increased likelihood of mistakenly declaring a negative reaction to food to be an allergy.

You probably don't know too many people who are allergic to apples or carrots (depending on what type of crowd you run with), but more adults are allergic to fruits and veggies than they are to peanuts. Most of us tend to think of peanuts as the most common allergy because of the frequency with which we hear about it in the media. Peanuts earned their star status for their potential to cause deadly allergic reactions, not for the frequency of which that actually happens.

That's not to say it never happens, however: While "only" 0.6 percent of the U.S. population is allergic to peanuts, that still represents more than 1.8 million people of all ages who are at some degree of known risk of experiencing a more dangerous reaction than occurs with other types of food allergies [source: Stoppler].

Next: Seriously, should we panic about food allergies?

Are Food Allergies Much Ado About Something or Nothing?

In 2007, around 3 million children under the age of 18 (of 73 million U.S. children, about 1-in-25, or almost 4 percent) were reported to have a food-related allergy [source: National Center for Health Statistics]. Interestingly, in 2006, there were fewer than 10,000 total hospital discharges of children for food allergies [source: NCHS Press Room].

What's the reason for the disparity in the large number of children who are reported to have food allergies and the relatively small number who are hospitalized?

Fortunately, not all children who have food allergies will require hospitalization. But another reason for the disparity could be that much of the available data is collected through verbal interviews -- simply asking a random sampling of parents if their children, yes or no, have food allergies.

The number of children with clinically proven food allergies is somewhere around 3 percent, or 2.1 million [source: Stoppler]. But according to parents' own yes-or-no responses, around 3 million kids have allergies. That's a difference of nearly 1 million children.

So what accounts for that difference? There are certainly some children who have had food allergy reactions whose parents haven't followed up those episodes with a doctor's visit for diagnosis. But likely there is also a sizable number of parents who have simply reported their children to be food-allergic when in fact their children have some form of food intolerance. It's an easy mistake to make, since food intolerance can have such similar symptoms as food allergies.

Food allergies are very dangerous, but somewhat less common than most of us tend to think. Of course, that's no solace to those who are food allergic, and widespread awareness is certainly a good thing when it comes to our individual and collective abilities to identify and respond to an allergic reaction. You will want to follow your pediatrician's advice when it comes to your child's diet, but your child isn't so likely to develop a food allergy that you should stay up at night breaking out in hives worrying about it.

See the next page for lots more information on food allergies.

Is American wheat the cause of gluten sensitivity?
Is peanut oil safe to eat if you have a peanut allergy?
Can a shellfish allergy cause chapped lips?