Is there a link between heart disease and kidney disease? 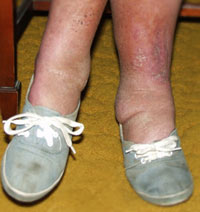 Fluid overload, which causes swollen legs like these, happens with both heart failure and kidney disease.
Steven Puetzer/Photonica/Getty Images

Fluid overload is most frequently caused by heart failure. As the heart weakens, blood flow returning to the heart slows, backs up in the veins and causes fluid buildup in the tissues. Heart failure also affects the kidneys, resulting in less efficient elimination of sodium and water. The retained water increases the fluid congestion.

Fluid overload can also occur as a result of kidney disease. In addition to eliminating the body's waste products, the kidneys play a role in maintaining a normal balance between sodium and fluid. The balance is no longer maintained when the kidneys are impaired, and sodium and water begin to accumulate, causing fluid overload.

When patients have some, but not too much, excess fluid in their blood, the situation can sometimes be remedied by limiting the amount of salt in their diet. Oral medicines (diuretics, or "water pills") may also be prescribed to reduce the fluid overload. However, when there's too much excess fluid, these measures stop working and eventually many people with fluid overload require hospitalization.

In the hospital, doctors may prescribe intravenous medicines like loop diuretics, vasodilator drugs (which cause blood vessels to widen so more blood can flow through) and inotropic drugs (which stimulate the heart to beat more strongly). These types of intravenous drug therapies generally require a hospital stay of around six days.

When diuretics fail to relieve the excess fluid, a procedure known as ultrafiltration may be used. On average, ultrafiltration therapy requires a hospital stay of around three to four days.

To learn more about heart and kidney disease, take a look at the links below.