Please Do Not Remain Seated 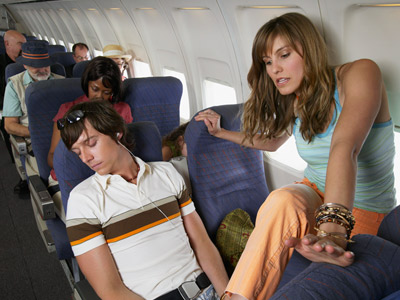 It's a good idea to get up and move around on a long flight -- even if it's a little tricky to maneuver your way out of your seat.
Digital Vision/Getty Images

According to the World Health Organization, sitting on a plane for more than four hours doubles your risk of developing a blood clot [source: Canada]. Researchers estimate that up to 5 percent of all air travelers end up with blood clots [source: IHN]. And airplanes present perfect conditions for DVT: altitude, dehydration and lack of movement.

Airplane cabins are pressurized, but they're pressurized to about 8,000 feet (2,438 meters), not sea level. The higher the altitude, the less oxygen there is in the air [source: Travel Doctor]. Your blood tends to respond to a decrease in oxygen by increasing platelet count. Platelets are the particles in your blood that allow it to clot if you cut yourself. Platelets make the blood more viscous, which increases the chances of forming a clot.

This reduction in oxygen at altitude, along with low moisture content in the air, also leads to dehydration. Dehydration increases the risk of developing a clot because too little water in the body makes the blood thicker. Dehydration is common when traveling because at high altitudes, people usually don't feel thirsty. That, along with the general rush involved in plane travel, leads most people to forgo drinking as much water as they might at home.

High altitude and dehydration are important risk factors, but they're minor compared with lack of movement. Sitting in a car for eight hours -- or in a tank for several days -- is almost as bad as sitting for the same amount of time on an airplane. What we now call economy class syndrome was actually first observed by doctors during World War II in relation to an increase in blood clots following the raid on London, when many people spent hours on end crammed into air-raid shelters [source: WSU]. Lack of movement over a long period of time inhibits circulation, especially in the legs because they're so far from your heart. Blood ends up collecting in the legs. When blood sits too long in one place, platelets can stick together, forming a clot in a vein. If that clots breaks off and starts moving through your system, it can end up in the lungs and cut off oxygen to your heart.

The lack-of-movement problem is made even worse because airline seats are cramped. People can end up with their legs bent for many hours at a time, which further reduces circulation.

Everyone is susceptible to DVT on planes, although older people are more likely to develop it because of general circulation problems, as are people with heart disease, circulation disorders and those who are on drugs that can increase clotting, like birth control pills. But you can lower your risk by developing a few good travel habits:

To most of us, drinking water and getting travel clearance seem far less stressful than having to move around on an airplane. Most people don't even want to go to the bathroom on a flight because you've got to wake up the person next to you if you're not sitting on the aisle. But moving around is the most important thing for preventing clots, so go ahead and wake the guy up. Sleeping on a plane can encourage clot formation, anyway. It's about as immobile as you can get.