What really happens when you can't stop eating? 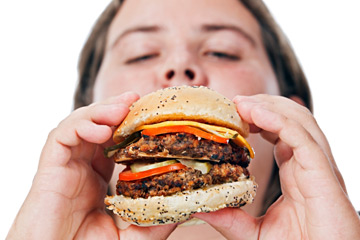 People who suffer from Prader-Willi syndrome have an insatiable appetite. They never feel full, so they don't stop eating.
©iStockphoto.com/RapidEye

While you may look forward to your annual Thanksgiving feast, no one looks forward to the post-feast feeling of a stomach stretched beyond capacity. One belt-busting meal may fill you with caloric regret -- and have you making promises to start working out again tomorrow -- but one meal doesn't necessarily indicate a pattern of unhealthy eating.

But what if that type of feasting extended to every meal, every day? Certain health conditions can cause binge eating and food obsessions. Let's first look at binge-eating disorder (BED), a condition characterized by episodes of chronic compulsive overeating. Unlike bulimia, sufferers of binge-eating disorder eat compulsively but don't purge or exercise afterward.

Nearly 3 percent of Americans suffer from BED, and that puts them at risk of developing a weight problem or depression. Though some who suffer from the disorder are normal weight, many become overweight, obese or morbidly obese. While the cause is unknown, researchers are studying the relationship between dieting and bingeing, the link between depression and the condition, and the role our brain chemistry plays in the development of the disorder [source: Weight-control Information Network].

To get to the root of your problem, you need to know why you overeat. Do you have an unhealthy body image or an unhealthy relationship with food, both of which are treatable emotional and behavioral issues? Or could you suffer from Prader-Willi syndrome, another condition characterized by insatiable hunger?

Prader-Willi syndrome affects all races and genders, but is a rare condition -- it occurs in roughly one out of every 10,000 to 25,000 people [source: March of Dimes]. It's thought to affect the hypothalamus, a small area of the brain that controls hunger and thirst as well as when we want to sleep or have sex, among other basic bodily functions. Symptoms typically begin as feeding problems in early infancy, and other characteristics of the condition may include learning disabilities, behavioral problems, muscle weakness and physical abnormalities such as short stature. Like any chromosomal abnormality, the symptoms and severity vary from person to person. But the one thing that stands out about Prader-Willi syndrome is the feeling of constant, insatiable hunger and rapid weight gain, starting as early as the person's first birthday. People born with Prader-Willi syndrome never feel full.

Binge eating, no matter the cause, can damage the body, specifically the endocrine system, which controls hormones and metabolism. The stomach becomes unable to recognize when it's full. Once this happens, your risk of obesity increases, as do obesity-related complications such as type 2 diabetes, gallbladder disease, certain cancers, reproductive problems, cardiovascular diseases, arthritis and joint problems, sleep apnea, asthma and even premature death. The Office of the Surgeon General estimates that as many as 300,000 people die every year from obesity-related health concerns. And this may surprise you: Having just 10 to 20 pounds (5 to 9 kilograms) of extra weight increases an adult's risk for premature death.

What Is a Low FODMAP Diet and Who Should Try It?
Is the BRAT Diet Still Beneficial?
Are stomach ulcers caused by stress?