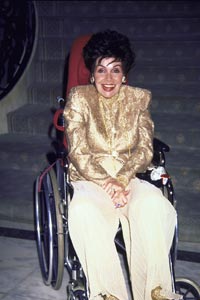 Currently, there are about 400,000 people living with multiple sclerosis in the United States, and more than 2 million people throughout the world. There's about a 1 in 750 chance of being diagnosed with it [source: NMSS]. But researchers don't yet know exactly what causes MS, or what makes some people more susceptible to it. It's often called the "prime of life" disease, because that's when people are usually diagnosed. The first attack often occurs when the patient is between the ages of 20 and 50, although it and subsequent attacks may not be recognized as MS until much later. Multiple sclerosis isn't contagious and doesn't appear to be directly hereditary, although the risk for people with parents, siblings or children who are diagnosed with it is somewhere between 1 in 20 and 1 in 40 [source: Robinson].

Caucasians, especially those of Northern European descent, are more likely to get MS than any other ethnicity. People who live north of the equator are diagnosed with MS more often than people living south of the equator. Some researchers think that the latter's increased exposure to the sun may somehow protect them. Others have also suggested that there are "clusters" of MS -- areas where a high number of people have been diagnosed with the disease. Although there have been studies in some of these areas, they have not yet found any reason for the "cluster," and many argue that the idea of "clusters" themselves is questionable.

The latest target in the search for a cause is the environment -- this doesn't mean the natural environment, but something outside of the human body. It could be anything from reactions to chemicals and toxins that we're exposed to on a daily basis, our increased stress levels, our diet, or other illnesses. Exposure to heavy metals like lead, for example, can cause neurological problems. Some believe that the typical Western diet, high in saturated fats, could be a factor. However, there's no evidence that these factors lead to MS. Some researchers think that the immune system is simply overburdened by everything that it has to fight on a daily basis. Its breakdown, they believe, has led to an increase in autoimmune diseases like multiple sclerosis.

Although there are arguments for all of these potential causes, the distribution of MS suggests that it's likely a complex combination of genetics and environment. So far, scientists have identified two genes that can increase the risk of developing MS. When it comes to the search for a cause, however, it's still in the beginning stages. From the future to the past: In the next section, let's take a look at the history of multiple sclerosis.