A History of Multiple Sclerosis 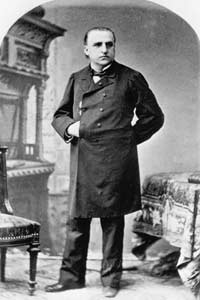 Like many other diseases, multiple sclerosis existed long before it had a name. Writings from as far back as the Middle Ages described patients with symptoms that doctors today believe pointed to MS. A Dutch saint named Lidwina, who died in 1433, may have been one of the first known MS patients. After she fell while ice skating, she developed symptoms such as excruciating pain, blinding headaches, problems walking and paralysis. Her condition got worse over the course of her life, but she did have remissions. Another well-known potential MS patient was a grandson of King George III, who described his symptoms in a diary that he kept until his death in 1848.

Twenty years later, Dr. Jean-Martin Charcot became the first person credited with identifying multiple sclerosis as a disease. A female patient of his suffered an unusual combination of symptoms. He tried some of the typical treatments for other neurological disorders, such as electrical stimulation and injections of silver (which helped alleviate the symptoms of syphilis), but none of them worked. After his patient died, he dissected her brain and discovered the brain lesions. He called the disease sclerose en plaques. Myelin was discovered shortly afterwards, although its exact significance was unknown.

Improvements in microscopes helped doctors in the search to understand the disease. In 1916, a Scottish doctor named James Dawson was able to clearly describe the inflammation and demyelinization after viewing brain cells of patients with MS through a microscope. At the time, doctors thought that MS was caused by a toxin or virus that made its way into the brain via the bloodstream, although they had no proof for either. In the 1930s, laboratory studies in mice suggested the possibility that the immune system was involved, but most doctors didn't take it seriously.

­­In 1947, a researcher at Columbia University found that people with MS had unusual protein byproducts in their cerebrospinal fluid, paving the way for today's MS testing. During this time, doctors believed that MS was caused by problems with blood flow and tried to stimulate circulation for treatment. After DNA's structure was discovered in 1953, doctors began to better understand both genetics and the immune system. The 1960s resulted in the discovery that MS was probably an autoimmune disease, and in the next decade, steroids were used to treat attacks. Scientists also developed the first disease-modifying agent.

Numerous clinical trials involving potential treatments and diagnostics took place in the 1980s and 1990s. MRI scans became the standard for diagnostics as well as testing the effectiveness of disease-modifying agents in slowing down the progress of the disease. There were also improvements in the use of drugs to treat symptoms, as well as the development of more effective rehabilitation and other types of therapies. Unlike MS patients of the past, patients of today have a wide range of treatment options. Recently, there has been promising clinical research in the form of stem cell treatments, which may be able to repair damaged myelin.

To learn more about multiple sclerosis and related topics, try the links to articles below.

Although the vast majority of cases are between the ages of 20 and 50, children under the age of 18 have been diagnosed with it as well -- at least 8,000 cases in the United States. It's even more difficult to diagnose a child than an adult, because there are many childhood illnesses and diseases with similar symptoms. Children may have some symptoms that differ from adult symptoms, such as seizures. Many children with MS are prescribed the same disease-modifying agents that adult patients take. However, because pediatric cases make up such a small percentage of the overall population of MS patients, there are even more unknowns as to how these drugs affect children long-term and how the disease will progress differently for them.