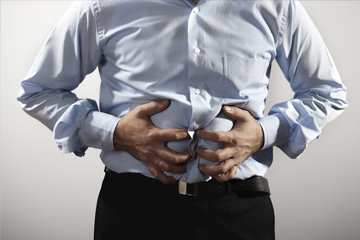 Your body would find a way to release that gas even if you never burped again.
faithhoca/Getty Images

Despite your initial misgivings, this blind date is going well. The two of you chatted effortlessly through the appetizer and main course, and are lingering over dessert. Just as you're about to suggest a second date, an unexpected force sets the evening back to zero. A burp -- one so loud and sudden that it took you by surprise -- wasn't exactly the way you'd hoped to end the meal. Red-faced, you mutter an apology and wish you would never burp again.

But what if you really couldn't burp again? Other than saving you embarrassment, would the inability to burp make your stomach explode?

The average person produces between 1 and 4 pints (2 to 8 cups) of gas each day [source Kantsevoy]. It comes from swallowing air, which happens while we talk eat, and chew gum. Gas is also produced in the stomach as food is broken down. All of this gas gathers in the stomach and to release it, we burp or fart nearly two dozen times a day.

People who release gas through excessive burping may have a chronic condition such as gastroesophageal reflux disease (GERD), an ulcer, irritable bowel syndrome or Crohn's disease. It could also be the consequence of a diet that's high in fiber and gas-causing foods [source: Kantsevoy].

For one woman celebrating the Chinese New Year, gas wasn't the only culprit. After a night of feasting and drinking alcohol, she was admitted to a hospital in Beijing with severe abdominal swelling. As she was undergoing surgery, gas burst from her abdomen, the alcohol came into contact with an electric surgical instrument, and it caused a fire. In essence, her stomach exploded. After the fire was put out, the surgery continued and her stomach was eventually removed [source: Lan].

There have been a few other documented cases of ruptured stomachs, but usually it's due to overeating, not gas, and it has typically happened in people who have eating disorders or who lack the mental capacity to stop eating when full [source: Dahl].

If you happen to overdo it during a particularly decadent meal and find yourself unable to get rid of excess gas by burping, it still has an out. After the gas works its way through your intestines, it might be released as a fart. So either way, you have a handy release valve that will keep you from exploding.

Farts Can Be Silent, But Can They Be Deadly, Too?
What's the Best Way to Stop a Nosebleed?
Without a Hippocampus, Your Long-term Memory Is History