Where does earwax come from? 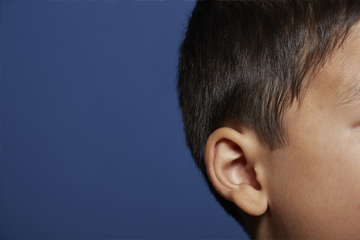 Earwax, also known as cerumen, is produced by glands located in the skin of the outer one-third of the ear canal. There are two types of glands that produce cerumen: sebaceous glands and apocrine sweat glands. The sebaceous glands release sebum — primarily made of fatty acids — which mix with the apocrine gland secretions to form cerumen.

While earwax isn't often the subject of polite conversation, it performs some important functions. Cerumen mixes with dead skin cells, loose hair follicles and dust and slowly sweeps the debris out of the ear canal. Because the ear canal is constructed like a cul-de-sac, a build-up of dead cells, earwax and debris could become trapped if not for a unique type of migrating cells. These cells are continually moving from the interior of the ear canal to the exterior. They are, in a sense, self-cleaning. The cells embark on weeks-long migration bolstered by the natural movement of the jaw; as we eat, talk, sneeze and cough, we help move the cells of the ear canal along their path.

All the while, the earwax lubricates the skin in the ear canal and keeps cracks at bay so microbes can't gain access. Conveniently, earwax has a slightly acidic pH balance, which discourages bacteria and fungi from taking hold. Better still, earwax prevents small insects from building cozy homes in the ear canal [source: Audiology Awareness].

A person's type of earwax, and its odiferous qualities, can vary according to genetic makeup. People of Asian and non-Asian descent have different kinds of earwax, characterized as either "wet" or "dry." A minute mutation of the ABCC11 gene is behind the differences, believed to be responsible for dry earwax and, incidentally, reduced earwax and underarm odor in people with Chinese, Japanese and Korean ancestry. In contrast, people of Caucasian descent had smellier earwax.

A plug of earwax the size of a banana offer clues about the effects of environmental pollution on wildlife, too. Scientists recovered the earwax from a blue whale, a species that keeps earwax for life, unlike earwax-rejecting humans. Analysis of the whale's earwax discovered the 12-year-old had significant contact with 16 different pollutants, such as pesticides, throughout its lifetime [source: McGrath].

Although there's little cause to believe human earwax will be studied to reveal the impact of our environments, it could reveal toxic heavy metals accumulating in the body. Earwax already offers clues into rare metabolic disorders. People with maple syrup urine disease (an inherited disease in which the body cannot break down certain parts of proteins properly), for example, also have earwax that emits a characteristic odor [source: NORD]. By understanding where earwax comes from, scientists are better able to identify the substance's normal — and abnormal — qualities.

Why do we have boogers?
Is there a health benefit to picking your nose?
More Americans Than You'd Think Smell 'Phantom Odors'