Is it possible to get taller as an adult? 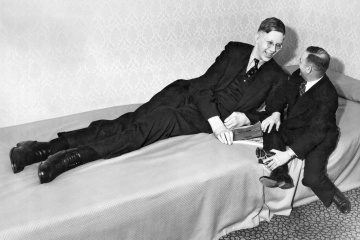 Robert Wadlow was already 8 feet, 7 inches tall at the young age of 19 in this photo — and he hadn’t stop growing yet.
Underwood Archives/Archive Photos/Getty Images

On Feb. 22, 1918, Robert Pershing Wadlow was born in Alton, Illinois. He was perfectly unremarkable in every way — until one remarkable exception revealed itself. By age 13, Wadlow, who had an overactive pituitary gland, had grown to 7 feet 4 inches, making him tall enough to be named the World's Biggest Boy Scout. By adulthood, he was 8 feet 11.1 inches in height; he was named World's Tallest Man. Wadlow towered over everyone he met as he toured the United States as a shoe company spokesman until his death in 1940. He would still be considered a giant if he were alive today.

According to the Centers for Disease Control (CDC), the average height of people in the United States is 5 feet 4 inches for women and 5 feet 9 inches for men. In the past few decades, the collective height of Americans has leveled out, especially when compared to the first half of the 20th century. From the early 1900s through the 1950s, the population got increasingly taller — about 1.5 inches taller every 20 years [source: CDC].

Endocrine disorders can cause adults to keep growing, often to astounding heights. The condition gigantism is caused by a tumor that creates an abundance of growth hormones. The condition begins in adolescence; by adulthood, it can lead to heights of 8 feet or more. Another type of tumor affecting the endocrine system can cause adults to develop acromegaly, a disease in which the extremities (hands, feet, even the jaw) reach gigantic proportions.

Hormone-fueled disorders aside, there is a slim chance you could continue to grow taller in adulthood — but only if you failed to receive adequate nutrition in your youth, when your body does most of its development. Humans are designed to have growth spurts during two stages in life: infancy and adolescence. These critical time frames extend from birth to age 3, then age 10 to 17. The body increases in height as hormones stimulate new layers of bone. Growth plates at each end of the bone determine the length of bones, and once they close, height gains cease.

Few people experience a growth in height beyond age 20, with some notable exceptions. There's a slim chance that the growth plates could remain open for a person up to his or her mid-20s. If a person was nutritionally repressed during childhood and adolescence, the ability to eat more at an older age, even into adulthood, can sometimes make that person grow taller. There's also a controversial surgery in which the bones of the legs are broken and separated, resulting in the addition of a few inches of length [source: Onion].

If you're raising children, you can guarantee their height gains by offering a balanced diet. But if you're an adult wishing wistfully for a few extra inches, your best bet might be a platform shoe!