Browse the article Exactly why is your thyroid so important? 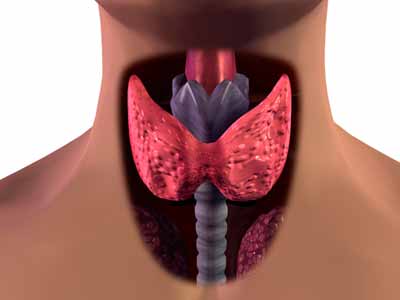 The thyroid is a very important part of your body -- but do you know why?  See more ­bodily organ pictures.
Purestock/Purestock/Getty Images

Chances are rather good you've heard the news that you have a thyroid -- but chances are also pretty decent you're not completely up to speed on exactly why you have one.

The human body operates like a complex factory, and like any factory, there's lots of assembly lines, machines and moving parts, not to mention all the workers going about their business.

The thyroid plays an important role in all this activity; it has something of a managerial position. Without the thyroid bossing everybody around, lots of work around the plant wouldn't get done -- or at least wouldn't be up to quality standards. Don't go thinking the thyroid is the top dog, however. It gets its marching orders from the pituitary gland, which in turn answers to the part of the brain called the hypothalamus. But instead of memos to conduct all this communication, the body uses hormones.

­If you're a teenager, you probably wish everybody would just shut up about hormones, but they're vital for the body to function properly. In general, hormones are molecules that signal the cells of the body to perform certain actions. A variety of hormones are produced in the various glands around the body; some of them affect many types of cells and others are more specialized.

But before we get into all that medical mumbo jumbo, let's take a step back for a second. Can you point to your thyroid? Need a hint? Thyroids are located in peoples' throats right below the larynx (also known as the voicebox), although in very rare instances they can migrate while a person is in fetus-mode. If that happens, the person ends up with his or her thyroid by the back of his or her tongue or all the way down in his or her chest. Assuming your thyroid made the trip all right, it should have set up camp right in front of the trachea (commonly called the windpipe). Shaped a bit like a butterfly's wings, the thyroid has two lobes that curl around the trachea connected by a narrow isthmus (think of the strip of land split by the Panama Canal).

It usually weighs in at less than an ounce, but it sure can pack a punch when it comes to your health. Want to find out if your thyroid's doing all right in the ring? Go to the next page to learn the basic operations of this glorious gland. 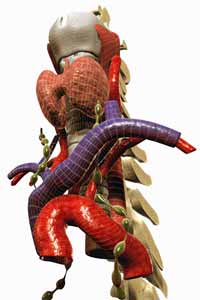 Your thyroid is always hard at work, but what tasks are making it so busy?
MedicalRF.com/ MedicalRF.com/Getty Images

Your thyroid works in concert with a whole team of glands to keep your body running smoothly. Like mailmen, they deliver messages (hormones) between themselves and other parts of your body so all those tiny cells are regulated and functioning at the proper levels.

The th­yroid's main job is to produce two very special hormones. They both have deliciously unpronounceable names, but luckily, they also have abbreviations if you're not in the mood for a tongue twister. The first one is triiodothyronine and the second one is thyroxine (or tetraiodothyronine) -- but to their friends, they're known respectively as T3 and T4. The method behind the moniker madness stems from the fact that T3 gets three atoms of iodine, while T4 gets -- ready for this? -- four atoms of iodine. Take a couple tyrosine amino acids, slap on a few other ingredients and you've got yourself some hormones ready to hit the town.

After they're released by the thyroid, these little guys hitch a ride in the bloodstream and get to work. Like door-to-door salesmen or restaurant flyer distributors, the hormones stop at each and every cell, knock on the door and tell the cell if it needs to be consuming more oxygen and nutrients -- thereby stepping up its rate of metabolism -- or vice versa. The hormones also have a hand in stimulating heart muscle contraction and nerve function, increasing the utilization of cholesterol and nutrients, ensuring normal growth and brain development -- some pretty important stuff!

Most of the cells in the thyroid are called follicular cells, but there are others calledparafollicular cells (or C cells) which produce another important hormone called calcitonin. The thyroid also has four teensy glands called the parathyroid glands, which are embedded in the back of the thyroid and produce the hormone creatively called parathyroid hormone. These two hormones, calcitonin and parathyroid hormone, work in tandem to keep your body's calcium level in check. We all know how important calcium is to prevent diseases like osteoporosis, but too much of a good thing isn't ideal either. That's where calcitonin comes in; it decreases how much calcium is in your blood, while parathyroid hormone works to beef those levels up.

Ready to find out how these microscopic masterminds impact you in the bigger scheme of things? On the next page, we'll learn what an unruly thyroid affects and what you can do to turn it around. 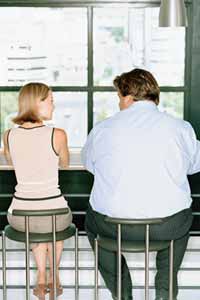 A lot of factors affect how much a person weighs, but diet and exercise aside, did you know your thyroid can have a hand in it?
Robert Daly/Stone/Getty Images

On the last page, we talked about how the thyroid has an impact on your body's metabolism; now, let's take a closer look at what that, and other functions of the thyroid, means to you in your day-to-day life. If your thyroid is going on a rampage, you have what's known as hyperthyroidism; if it's slacking off, you've got hypothyroidism. It's not until things start going wrong with their thyroid that most people become aware of just how much it was doing for them in the first place. Let's go over how exactly the thyroid affects your well-being, first from the standpoint of hyperthyroidism.

­When someone has hyperthyroidism -- which means their thyroid is putting in some serious overtime and producing hormones a little too enthusiastically -- a lot can go wrong with the body. Keep in mind, the endocrine glands don't normally output massive quantities of hormones; a little goes a long way. When someone experiences hyperthyroidism, he or she can have a variety of symptoms, most of them rather unpleasant.

Hyperthyroidism can cause sudden weight loss and increased appetite, rapid heartbeat (also known as tachycardia), irregular heartbeat (arrhythmia) or a pounding heart (palpitations). If your thyroid's acting wacky, you might develop a goiter; be sweatier than normal; feel nervous, anxious and irritable; have tremors in your hands; be sensitive to heat; experience continual fatigue and muscle weakness; have difficulty sleeping; grow hair that's increasingly brittle -- the list goes on.

Now, some of those symptoms are more serious than others, but at the same time, a lot of them are issues most people would associate with regular aging, a chronic lack of sleep or some other routine problem. If you've been dealing with several items on the list, chances are you might want to check in with your doctor for some tests.

On the other side of the coin is hypothyroidism. You'll really see why your thyroid is so important now. When the old thyroid conks out, trouble brews. This type of thyroid condition can cause someone to feel increased fatigue, forgetfulness, depression and sluggishness, have brittle hair and nails, be more sensitive to cold and feel constipated. Excited yet? The list continues with pale, dry skin; a puffy face; hoarse voice; high cholesterol; inexplicable weight gain; tender, stiff and swollen joints and muscles; muscle weakness and more.

When your thyroid's not around to rev up your metabolism, a lot of things can go wrong. What's even sneakier is you usually don't wake up one morning with every symptom on the list in full-fledged severity. You'll just have a little more trouble making it through the day without your trusty coffee, or you may look in the mirror and see your face appears a bit puffier and more aged than it used to or you could get an ache in your muscles even after just walking a short distance. After a while, you'll start to feel miserable all the time without even knowing why.

So, keep in mind there are tests for thyroid dysfunction and a number of treatment options are available. If you've got some of the symptoms on the list, it can't hurt to chat up a doctor to see if he or she thinks your thyroid is the culprit. After all, at first glance it might seem like an unimportant organ, but the thyroid is actually crucial for your body's metabolic function -- and an unbalanced metabolism means poor health in general. On the next page, there are a bunch of great links if you've got health and well-being on your mind.