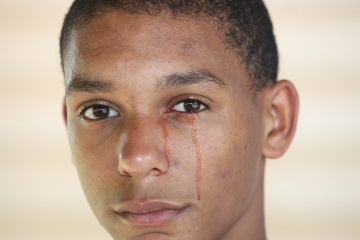 Le Chiffre, a fictional character in the 2006 James Bond film "Casino Royale," was not only an immaculate dresser, but he was also part of a long line of cinematic villains defined by exceptional physical quirks. Le Chiffre occasionally wept blood from his left eye, a trope employed to lend him a vulnerable quality, even as his supervillain persona pushed toward the inhumane.

Most of us have come to expect tears of blood from tragic, poetic and potentially evil characters in film and television. After all, the vampires on HBO's "True Blood" do it all the time. But could a person cry bloody tears in real life?

Hypothetically, yes. There are well-documented cases of bloody tears being shed. It's the primary sign of haemolacria, a condition in which a person's tears are either blood-tinged or entirely composed of blood.

Although extremely rare, there are a few cases chronicled in medical literature that describe people bleeding from their eyes. As late as 2015, a man from Antioch, Tennessee, experienced bleeding from the eyes after being struck by a sudden and severe headache. But he wasn't just crying blood — there was blood was streaming from his nose and mouth, a scenario that confounded doctors [source: Wilemon].

While researchers are still working to pinpoint a reason for spontaneous haemolacria, there have been a few clues along the way. A 1991 study linked haemolacria to female fertility. Of the 125 examined subjects (all of whom were in good health), researchers discovered that 18 percent of menstruating women had blood in their tears, compared to 8 percent of men and 7 percent of pregnant women. None of the post-menopausal women in the study showed any signs of blood in their tears. The findings led researchers to posit that haemolacria in fertile women is caused by hormones, but in the rest of the population, it is probably due to factors such as infection or injury [source: Ottavay].

Bacterial conjunctivitis, a relatively mild infection of the eye, has been known to cause bloody tears as well, but the symptom typically goes away after the infection is treated. A more serious cause is tumors of the lacrimal apparatus, which includes the gland that secretes tears as well as tear drainage ducts.

Tears of blood aren't just the stuff of horror films, after all. For those who live with this condition, awareness and sensitivity are keys for coping.

Doctors Provide Yet Another Reason to Never Hold in a Sneeze
How Glasses Correct Colorblindness
Why does it take my eyes several minutes to adjust to darkness?